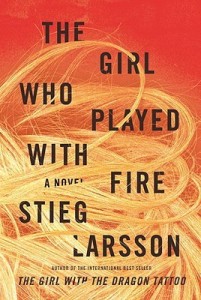 Stieg Larsson’s The Girl Who Played With Fire

When I finished The Girl with the Dragon Tattoo, I thought to myself, “Man, there really is something to this Stieg Larsson hype”. I absolutely loved it. However, when it ended, I thought, “Is there really a need for a 2nd and 3rd book?” Granted, I loved all of the characters but it seemed like everything was tied up pretty nicely. This was probably the reason I waited several months before picking up the sequel, The Girl Who Played with Fire. I could not have been more wrong.

To be honest, I  LOVE Lisbeth Salander. When I put down the first book, I had a great appreciation for the character but after finishing the 2nd installment – I think I fell in love with her. Also, I don’t think I’d really have a chance with her anyway. She’s just a little out of my league.

The book moves a tad slower than I would have liked but it was more or less along the same lines as the first one – so it’s hard to call out Larsson on that. However, when he’s writing the action scenes, he seems to do so with a sense of urgency that comes across as very exciting. I was sucked in deep when Salander was caught up in more than a few confrontations. While she’s missing from a good portion of the novel, Larsson does not leave you waiting impatiently for her return. Probably due to how strong the supporting cast is and the few subplots that he’s woven throughout.

Also, it’s worth noting that he really dug deep and unearthed his violent side as the final few chapters have some of the most brutal scenes he’s yet to write. I really don’t want to give a lot away in regards to specifics but there’s a few weapons that do some pretty gruesome damage.

I’m really looking forward to the next entry, which I have bumped up my “to-read” list. This one ends with you wanting more and some questions are left unanswered. It’s such a shame that Larsson passed away, Salander is such an iconic character. I can probably guess that she’ll be farmed out to other writers in an effort to keep the series going – the potential to make more money is a hard thing to deny. Let’s hope that the quality does not suffer because I’d be willing to keep reading.