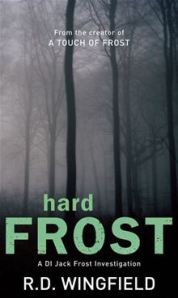 For a town with so much crime, they certainly have a hard time staffing their police force.  This time around, Denton is subject to some gruesome occurrences.  Detectives are trying to track down a missing child believed to be the bait in a blackmail scam while elsewhere, infants are being stabbed in the comfort of their own cribs.  If that wasn’t bad enough, a deranged mother has murdered her three children and then leaped to her death in front of an oncoming train.

Just like in previous Inspector Frost novels, Wingfield has Frost doing the work of many.  This could be due to the fact that the Denton Police Department is so wretchedly understaffed or it could be that Frost simply has nothing better to do.  For a man that seems to hate most of the people he works with, he can rarely be found doing anything else.  The brief amount of time he does designate to himself are mainly just to sleep and even when he’s done that, he’s right back at his desk.

In the first three books, Frost was insufferable to say the least.  He disliked most of his co-workers and worked hard to make life miserable for his boss, Chief Superintendent Mullett.  This time around, he not only annoys all of those around him but he also succeeded in irritating me.

I understand that Frost is written in such a way to come across as abrasive and short with both those he works with and those he investigates but I’m starting to wonder why Mullet even keeps him around.  Sure, he eventually gets the job done but is the aggravation worth it in the end?  I’ve got to think it isn’t.  In today’s day and age, Frost probably couldn’t get away with half of his comments or even a portion of his actions.  He’d have so many sexual harassment lawsuits thrown his way he wouldn’t know what to do with himself.

I don’t want it to seem like I suddenly have an issue with the character.  Frankly, he’s always been crass.  I just can’t understand why Wingfield decided to turn him up to eleven this time around.  Hopefully in the next 3 books he isn’t so ridiculous and returns to his drier, more subtle style of humour that originally brought out his charm.