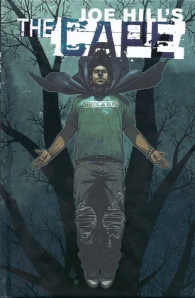 You know that old saying, never judge a book by its cover? Joe Hill’s The Cape is the perfect book to apply that wisdom to. On the cover, we see a man hovering above the ground, donning a cape and dressed in a t-shirt, ripped jeans and tennis shoes. Without knowing anything about the story, you’ve got to assume he’s an unlikely superhero. However, if you crack the cover and dive into the story, you’ll be as shocked as I was when the story switches gears taking the reader in an entirely different direction.

As an eight year old boy, Eric shares the dream of many children his age, to strap on a cape and fight the never ending battle against evil. However, as a child, Eric suffers a tragic accident and his future becomes forever altered. Years later, Eric’s life has spiraled out of control and he’s developed a hatred for those he feels have emotionally abandoned him.

The severe headaches that have plagued him since the accident never subside and when his relationship with his girlfriend falls apart, he begins to suspect she’s sleeping with his older brother. It’s really the perfect storm that creates the monster he becomes. One night after finding his childhood cape in his mother’s home, he discovers it gives him the power of flight. Rather than using this new found ability for good, he decides to seek vengeance against those who’ve wronged him.

Joe Hill’s got some great ideas floating around in that furry noggin of his and in my quest to consume everything he’s written, I’ve experienced some fantastic fiction. The Cape is no exception. While he may not have been as hands on in the publication of the graphic novel, he did write the original story on which it’s based. Appearing in his short story compilation, 20th Century Ghosts, The Cape is a story about how we choose to react to the misfortunes in our lives. While some can simply take them as learning experiences and move on, others swallow them deep down creating a stockpile of grudges and anger. Unfortunately for those around him, Eric embraces the latter method.

It should be worth nothing that Zach Howard and Nelson Daniel’s art is very reminiscent of Gabriel Rodriguez’s work on Locke & Key. It has just enough of a cartoon feel to keep the subject matter from getting too dark. It’s appreciated because in all honestly, not a lot of light escapes this story.