In 1999, WWE superstar Mick Foley put pen to paper and churned out one of the most revered books about the career of a professional wrestler. Foley’s New York Times best seller, Have a Nice Day, broke down the walls for pro wrestlers and fans alike to write about this unique form of entertainment. While a select few trickled out after Foley’s blockbuster, today in 2013, it seems like everyone has published a tell-all memoir. I thought I would take the time today to spotlight five of what I consider the best of the best. 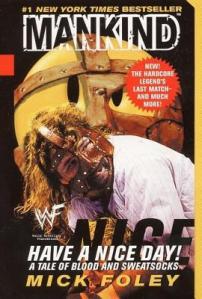 Mick Foley’s Have A Nice Day

1. Mick Foley’s Have A Nice Day

Mick Foley had originally been approached by Regency Books to sit down with an accomplished writer and tell his life story. Always looking for a challenge, Foley asked if he could write the book himself. Taken aback by the request, the publisher reluctantly allowed Foley to give it a shot. What was originally thought to have been one hell of risk, produced a great reward. Constantly carrying a pen and notebook, Foley stole any spare moment he could to contribute to his life story. The hard work paid off as Foley’s book shot up the New York Times bestseller charts eventually claiming the top spot.

Foley discovered he had a real talent for storytelling that would eventually lead to a career he pursued after hanging up his boots. Since 1999, Foley has published a full length novel, several children’s books and three additional memoirs. Of all the pro wrestlers who have taken a stab at writing, Foley is by far the most successful.

2. Hitman: My Real Life in the Cartoon World of Professional Wrestling

Right about the time Bret Hart became WWF/E Champion, my obsession with pro wrestling was just hitting its stride. I was but a young 8 year old and began idolizing the Excellence of Execution, a fandom that would stick with me throughout his wrestling career.

When I heard that Bret was finally writing a book, I was beyond what you would normally consider excited. Turns out that throughout his career, Bret had carried around a tape recorder and chronicled his exploits in hopes of an eventual memoir. Work on his life story began around 1999 but due to his stroke in 2002 and the deaths of several close friends and family members, Bret had been forced to continuously delay the release. It was not until 2007 that Hart’s book finally saw the light of day.

While this book is not as funny as Foley’s, there is so much information crammed in here (the original draft had been over 1000 pages) that it is a must read for any Hart fan or wrestling historian.

3. Chris Jericho’s A Lion’s Tale: Around the World In Spandex

Like Hart’s, Jericho’s book had been one that had been heavily anticipated. Released in the fall of 2007, Jericho’s A Lion’s Tale tells his life story from humble beginnings to just before debuting in the World Wrestling Federation during the summer of 1999. Part One of a planned three part series, Jericho tells of his early years training under the Hart family to working in Japan and Mexico, to arriving in ECW and finally WCW.

While you’re not reading this expecting any jaw-dropping revelations about the industry, there’s never a dull moment with Jericho guiding you through the insanity of the industry. Highlights include the naming of his character through a call-in TV show, his first meeting with Eddie Guerrero and his frustration in WCW.

The follow-up focuses on a good portion of his life outside of the ring. While it had lost a little of the charm that the first book possessed, it’s certainly not something you should pass over. 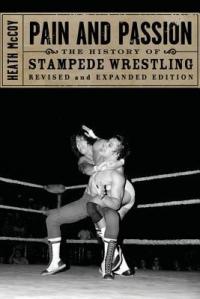 Pain and Passion: The History of Stampede Wrestling

Check out my review for Pain & Passion!

The perfect companion piece to Bret Hart’s 2007 autobiography, Calgary Sun reporter Heath McCoy takes you along for the rise and eventual collapse of Stu Hart’s Stampede Wrestling. Hart’s groundbreaking Calgary promotion had been where a lot of legendary performers cut their teeth in the squared circle. Everyone from Bret Hart to The British Bulldogs to Bad News Brown can be traced back to their grappling days in The Sandstone City.

McCoy has the advantage of being an outsider and has no real agenda to push here. Pulling no punches, McCoy details brutal road trips and vicious pranks the boys had pulled on one another. One of which involved filling a toilet with kerosene before a performer dropped his lit cigarette in to be extinguished. Surprise!

Of all the books on this list, this was the one where I had the least amount of knowledge going in and thus learned the most upon finishing it.

The Death of WCW

The founder of WrestleCrap.com and the founder of the weekly Figure Four Newsletter teamed up to perform an autopsy on former pro wrestling megapower, WCW. After WCW was purchased by Vince McMahon in early 2001, R.D. Reynolds and Bryan Alvarez try to figure out exactly what went wrong with Ted Turner’s “rasslin’” company. Turns out it was a lot. Whether it was the constant lack of focus by those who booked the show, inconsistent story lines or performers with too much backstage power, WCW was both a money making and eventually a money wasting machine.

While the book spends a great deal of time entertaining you with humorous stories and anecdotes, it’s also rich with information. Existing completely without an agenda, Reynolds and Alvarez just tear this company to shreds and point the finger at those responsible.

It should be worth noting that the authors have been approached by the publisher to release a 10th anniversary edition. In a recent posting on WrestleCrap.com, R.D. Reynolds made it know that all the previously cut material will find its way back in as well as a look at the lasting effects WCW had on the industry within the last 10 years.