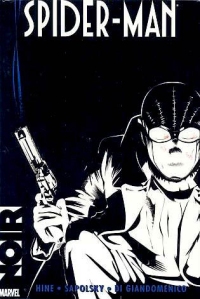 It’s 1932 and corruption rules the streets of New York City.  From the mayor to the police force, everyone’s got their hands deep in the pockets of organized crime.  Following the murder of popular socialist Ben Parker, his widow May takes up where he finished off – criticising those in power and urging the downtrodden to rise against their oppressors.  Their adopted nephew Peter, enraged over his Uncle Ben’s murder, looks to photographer Ben Ulrich as a mentor, someone who can potentially bring about real change.

While observing a heist with Ulrich, Peter is bitten by an unknown breed of spider which of course, leads to his acquiring his powers.  Rigging up a costume using Ben’s uniform from The Great War, Peter becomes Spider-Man.  With a means to fight The Goblin and his cronies, Parker aims to bring balance to a struggling Big Apple.

Earlier this year I had read Neil Gaiman’s Marvel 1602 – a story in which an alternate origin and timeline is presented for the heroes of the Marvel universe.  With Spider-Man: Noir, a similar experiment is attempted by placing ol’ Web-Head back in time, all the way back to depression-era New York City.  The latter works a lot better, or at least I enjoyed it more.

I enjoyed the visual style of Carmine Di Giandomenico as he crafted the dark and gritty atmosphere that the story required.  Throughout the story you’ve got a speakeasy nightclub filled with city officials and gangsters alike, rampant drug use and brutal violence set against the backdrop of the dead of winter.  Can’t get much more bleak than that.

While you’ve still got J. Jonah Jameson running The Daily Bugle, there are a few spins on classic villains like The Vulture, Kraven and The Green Goblin that keep things interesting.

Overall, I enjoyed it.  Despite the fact that it’s presenting itself as noir in the early 1930s rather than the standard of the forties and fifties, it has enough of the classic elements to make use of the genre effectively.  While it’s not my favorite spin on a classic character, it’s a quick read that has me interested in grabbing the second volume.