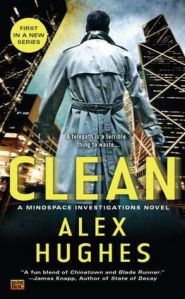 A deeply-flawed, drug addicted telepath acts as a police consultant to help bring down a serial killer. The stakes are raised when a vision puts him in the killer’s path. Can he bring down this murderous monster or will his premonition come sooner than expected?

I received a review copy from the author in exchange for a fair review.

Alex Hughes has crafted a compelling universe for her characters to play in. A self-admitted cop show junkie, Hughes mashed her love of police procedurals together with speculative fiction to create Clean, the first novel in her Mindspace Investigation series. The story picks up sixty years after the devastating Tech Wars, an event fought with computer viruses and self-aware machines. If it wasn’t for the psychic powered force known as The Guild, we’d all probably end up like Neo, floating in a pink sack powering our mechanical masters.

Where Hughes’ talent truly lies is in her world building. She’s clearly put a lot of time and effort into constructing the Atlanta of tomorrow. The scenes in which characters descend into Mindspace – a tool used by telepaths to detect changes and abnormalities in our environment undetectable by us normies – were fascinating and easy to grasp (fishbowl analogy was excellent). Given the events of the Tech Wars, the US government has scaled back its overwhelming reliance on technology. Heavy filtering procedures are in force when sending emails, net access is limited and hard copies are once again essential when it comes to paperwork. It’s not often you read a novel based in the future featuring flying cars but with reduced levels of technology.

Hughes mirrored a lot of the great hard-boiled protagonists by saddling the telepath with an addiction – a narcotic dubbed Satin – he cannot easily overcome. Knowing he’s only one mistake away from finding himself out on his ass, it leads to some intense scenes where he’s teetering on the edge without much to keep him grounded. That being said, the only real constant in his life is Swartz, his addiction sponsor, who is determined to keep him on the straight and narrow. While their interactions are minimal, their importance keeps the story moving forward. I would’ve actually liked a little more between the two.

Aside from his feelings for his partner Isabella Cherabino, he doesn’t have much going for him. In fact, my only real gripe involves some of the back and forth between the two. There’s clearly some chemistry there, but I found the telepath came across as whiny or annoying when he pined for her. I’m not advocating for the roles to be reversed – I’d dislike it either way – I guess I just wanted less romance; something that while not overwhelming, disrupted the flow of the story.

I’m very interested to see where this goes from here. Luckily for me, I’ve got the sequel on deck!

**Sidenote** The telepath does indeed have a name but it’s being withheld in this review as it would spoil one of the strongest moments in the novel.

One thought on “Clean”