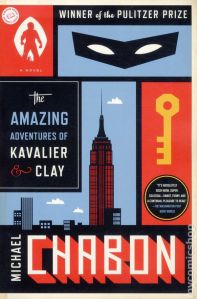 The Amazing Adventures of Kavalier & Clay

As World War Two is beginning to take shape, a Jewish family ushers their oldest son Josef out of Europe to live with his cousin Sammy in New York.  While Sammy works for an ad agency, his real passion is in storytelling, more specifically, the booming medium of comic books.  When he realizes Josef’s artistic talent, the two create The Escapist, a superhero to free people from the chains of oppression.

As the industry grows, so does their ambition.  The two collaborate on creating additional heroes establishing themselves as a dynamic partnership.  Michael Chabon’s Pulitzer prize winning epic tells the story of two men and their rise to cultural icons in 1940s America.

It’s not often that I stray from my comfort zone of thrillers, mysteries and comics but with the amount of praise heaped upon Chabon’s work, I thought I’d give it a shot.  Afterall, the guy did write a draft for Spider-Man 2 and while only a supposed third of it was actually used, it is one of my favorite comic book movies.  It also doesn’t hurt that it’s about comics to begin with as well as World War II, both of which I enjoy reading about more as time goes on.

Initially, I was a little worried.  Chabon’s style seems to be in line with someone who could call himself a “wordsmith”.  It almost felt at times like he was showing off in a way – trying too hard to differentiate his prose from other authors’.  Look, I’m not criticizing Chabon for being “different” nor am I saying that it would’ve been nice if he “dumbed it down”; it just took some time for me as a reader to settle into his style.  Once I did though, things flowed nicely.

I know it’s a fourteen year old novel and I’m not about to sail into spoiler territory here but I did feel it was a little on the long side and maybe it could have been edited somewhat more tightly.  There were points where I felt the story dragged a little too much for my liking but it’s hard to argue against a novel that won a Pulitzer.  Perhaps I’m a little thin on patience knowing I have a ton of books on my to-read pile.

These are minor complaints really.  The story is certainly a great period piece (taking place in my favorite historical setting of the 30s through the 50s) and an instant classic.  I’ll definitely be checking out more of his work.