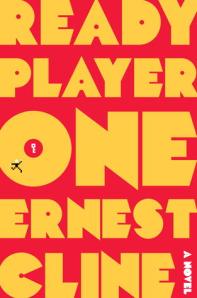 Ready Player One by Ernest Cline

John Hughes movies are all the rage.  Kids everywhere are firing up Atari games.  Billy Idol and Cyndi Lauper songs are blasting in dance clubs.  To the average person in the 1980s, this may appear par for the course but in Ernest Cline’s sci-fi novel Ready Player One, we’re no longer in the 1980s, we’re in the year 2044 and the most obnoxious decade of the 20th century is back in a big way!

The whole world is up shit creek without a paddle.  People are living in crude skyscrapers constructed from stacked mobile homes, crime is at an all time high and the economy is in the toilet.  The only escape from this dreary existence is a massive online RPG network dubbed the OASIS.  Players strap on a visor giving them full 360 degree vision of a computer generated world in which they design their own avatar and live out a much more pleasant existence.

The game’s creator, James Halliday, passed away a few years prior and before doing so, hid a prize deep inside the game.  Halliday decided that whoever could claim the elusive prize would gain controlling interest in his company and inherit his unbelievable $240 billion fortune.  Knowing that everyone on earth would be gunning for it, Halliday did his damndest to make uncovering his “easter egg” as challenging as possible.  One would have to both know his life story inside out and be a true scholar of the 1980s.  Well, unless you’re a giant soulless corporation like IOI (Innovative Online Industries) with its sights set on complete market domination.

For years IOI have been sending out their army of hunters, desperate to uncover the location of the egg.  Fortunately for the OASIS community, IOI haven’t made headway in their search.  It isn’t until a young player named Wade Watts from the stacks in Oklahoma City uncovers the Copper Key – the first step in the search for the egg – that things really begin to heat up.  Can Wade complete the quest before IOI claim the prize or will another ambitious player step up to the plate and nab the billion dollar crown?

Despite being born in 1984, I’m not quite a student of the 80s.  I was six years old when the calendar turned over to 1990 and the following ten years really crafted my sense of humor and fascination with pop culture.  Put on an old episode of the CG TV show ReBoot or Pixar’s first Toy Story to really get the nostalgia drug following through my veins.  While I was worried that the majority of the references within Cline’s Ready Player One would sail over my head, thankfully I had enough crap jammed into that “useless-knowledge” part of my brain reserved for Saturday morning cartoon shows, WWF wrestling, Ghostbusters and Top 40 radio to get me by.

While the book took a little too long to get going for my taste, once Wade (or Parzival) grabbed that Copper Key, Cline pushed down on the pedal and took this Delorean of a novel to 88mph.  In looking around at several other reviews, it’s hard to believe people haven’t praised the dialogue nearly as much as I feel it’s deserved.  While Cline isn’t doing anything special per se, it should be noted that everything just feels so natural.  I’m going to really miss these characters.

Bottom line, this is a really fun book.  I welcome the person who takes a crack at recreating the ultimate 90s nostalgia trip where all the characters wear flannel shirts, watch Boy Meets World and obsess over Kevin Smith movies.