I recently had the chance to chat with debut author Nick Cutter about his stomach churning horror novel, The Troop.  Nick stopped by to chat Stephen King, the perils of being a pen name and not worrying about trying to please every reader. 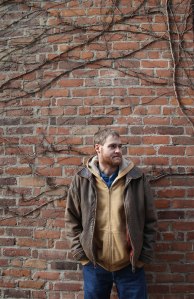 Hi Nick, welcome to Every Read Thing!  Can you tell us a bit about yourself?

Hello, Brandon. Well, I can’t tell you too much seeing as I don’t actually exist. I’m a pen name, which is a lonely lot in life! But I guess I can say that my first love was horror fiction, and it’s great to have an opportunity to write in that vein now.

What’s the story behind The Troop’s creation?  How did you come to write an old school balls-to-the-wall kind of horror novel?

I was influenced by early Stephen King, Barker, Joe Lansdale, some of the splatterpunk writers from the 80s and early 90s. That was what I cut my teeth on as a reader and later, a writer. Those writers, they really went all out. I think at the early parts of one’s career, before the reviews and so on, you don’t really know if you’re being extreme or testing anyone’s tolerance threshold. You’re just writing what interests you, what keeps you typing. So I wanted to write something like that. A story that was disturbing, in kind of a bone-deep way. I don’t know that I accomplished that, but it was my aim setting out.

First things first, how does it feel to scare the pants off of Stephen King?

Yeah, well, I’m sure he wasn’t pantsless in terror! But of course, it was one of the highlights of my career. I was sitting on the sofa when my editor emailed me with the blurb, and I turned to my girlfriend and said, Well, hell, there’s something to cross off the bucket list. It’s nice when something like that happens out of the perfect blue sky. Mr. King is hugely supportive of writing and writers, so it was wonderful that he chose to shine a little light on the book.

Being from the East Coast of Canada myself, it was nice seeing Prince Edward Island as the setting for your novel.  What initially attracted you to the Cradle of Confederation?

As a Canadian who’s spent a little time out East, mainly New Brunswick but with trips to PEI, I just felt like it would serve my needs. I could’ve chosen some remote island off one of the Great Lakes, maybe, or out west even, but PEI just felt like the right choice geographically. Plus I know a lot of people from PEI and they’re all a bunch of sickos, so I thought I’d serve up a bloody cut of meat right in their home province!

There are some gruesome moments in this novel, a few of which actually caused me to put the book down and walk away in an attempt to compose myself.  The scene involving the sea turtle was an especially difficult read – did you have trouble finding the right tone for the novel or did it come easily?

I’m not sure I found the right tone, really, but it’s impossible to find the tone that suits every reader. If I’d softened some of it, the real horror lovers (at least lovers of a certain type of horror) would’ve said I’d chickened out instead of going for the jugular; and since I wrote it the way I did, no holds barred, you’ll have some readers saying I went too far. It’s a no-win situation, so I just wrote it the way that felt most natural to me. Y’know, there’s kind of a sentiment in CanLit that you ought to gloss over or find a poetic distancing device to describe horrific events in a diffuse way. I remember reading some book, can’t remember the title, that described a mortar blast dismembering someone, and it was painted in such a distanced way, metaphors of flowers blooming and paper dolls ripped apart and whatnot, totally uninvolved and distanced from how the event would actually unfold … it felt like a huge cheat to me, and a lie and a bromide to a certain readership who could only accept reading about such an event if you painted the outside corners of it, poeticized and almost romanticized it. I think that’s cheap, it’s a lie, and it’s kind of weak-willed on both an author and a reader’s part. If you’re gonna write it, write it. Don’t gloss it or weasel it or try to turn something rotten or terrible or terrifying into something palatable and sane and cleansed. Or do that, but don’t get pissy when someone else takes a different tack on the same scene, one that paints it in what may be its truer and unflinching colors. Anyway, that’s me bitching and complaining. All of which is to say, the turtle scene was tough to write but it felt like a vital scene, and a true scene to me, personally. But people’s tastes are gonna vary on that, and that’s totally fine and understandable.

I’m not sure this novel would’ve been nearly as effective if you didn’t succeed in making the majority of the troop so likable.  When it came time to start racking up the body count, did you have trouble killing off your creations?

Aaaah, not really. They’re just a buncha words on a page. Kidding! No, absolutely it was tough seeing a few of those kids meet their fates. A lot of writing, with me, is going back into my memory banks and remembering incidents with friends or whoever and then drawing those into the book. So those characters are a synthesis of me, and of people I’ve known and incidents we’ve experienced together. And to me … listen, I got a little weepy at the end. Both writing it and editing it. It’s a little lame, maybe (or maybe not at all), but I sat behind my desk and had a little cry each time I worked over certain bits of the book. I don’t expect readers will get that way, but again, I spent a lot more time with those boys in my head than a reader ever will. And to me, that’s a good sign. If I get that way not only when I’m writing, but when I’m rewriting and editing, if I get that kind of emotional kickback, then it’s my hope that a fraction of that gets translated on to the reader.

I loved the insertion of the news articles and testimonial recordings.  What inspired you to take an alternative approach in dealing with the outside world beyond the events taking place on Falstaff Island?

That’s pure Carrie. As I say in the acknowledgements, I pretty much aped Stephen King’s first book in terms of how I calibrated the narrative gearing of The Troop. It’s great, as you note, because you can inform the reader about stuff that’s happening off the island, outside the little microcosm of those boys fighting for their life, to show the “big picture” stuff that resulting in them being there in the first place. The plots of Carrie and The Troop are completely different, but the debt is due to the master of horror. 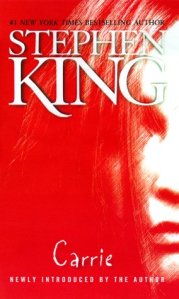 King’s Carrie was a huge influence on The Troop.

There’s been quite a bit of critical praise heaped upon this debut novel (and deservedly so).  Given the extremely graphic subject matter, were you surprised to find it so openly accepted in the book blogging community rather than just the niche horror readers?

Well, it’s weird. To me, the returns are mixed. Maybe that’s just me, always seeing a dark lining to every silver cloud. Others seem more enthusiastic about the reception so far. Anyway, that’s just my writing style: even with my other work, reaction is almost always mixed. You have your lovers, your haters, and those in between. And very few in between, really. It’s polarized. Which is fine; I’m long enough into my career that I’ve given up on trying to meet every taste. If you did so, I think you’d find your writing becomes the equivalent of tofu: no taste, really bland. Whether it will find a larger audience, I don’t really know. As we speak it’s over a month before it hits the racks, so there’s still much to be decided. But yeah, if it finds some readers outside of the genre, that would be lovely. But if it goes down as a bit of a cult horror novel, that wouldn’t be such a bad thing either. There are so many writers who I love and respect who never quite break out, and it seems terribly unfair but again, there’s so much about the writing life that you can’t possibly control—you’ve got to cast your lot with the fates, as it were, and hope for some good luck. So if it ends up doing okay, great. If not, I’ll know I’m in good company with plenty of other fine writers who just never caught that fortunate wave.

Gone Girl. I suppose that makes me one of a million who’d say that, but it’s a great goddamn book.

What’s next for Nick Cutter?

A book set down in Challenger Deep, the lowest undersea point on earth. Ooooh, spooky!

I want to thank Nick for stopping by and answering a few questions about his new novel, The Troop.

If you want to read more about this blockbuster release, check out The Troop’s website.

Check out my review of The Troop!