DMZ: On The Ground

In the not-too-distant-future, a new civil war has erupted between the United States of America and the secessionist Free States Army.  Both factions have declared the island of Manhattan a Demilitarized Zone (DMZ), leaving those inside to fend for themselves.  An intern with Liberty News Network, Matty Roth, has elected to live in the zone and document life inside the war-torn Big Apple.

As the opening trade in a lengthy series, On The Ground does a great job establishing the conflict, as well as key figures on both sides of the battle.  It presents life in Manhattan as a day-to-day struggle for citizens who reside within the martial law style society.  Although it takes Matty time to establish meaningful relationships and to develop true trust in those offering a helping hand, once he does, he begins to show backbone and discovers the immense power he holds in swaying the public’s perception of the war; a perception that has been skewed by the men and woman behind Liberty News. 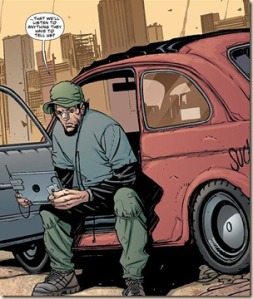 The only real issue I have after putting down volume one is with Matty Roth.  I get that Wood wants to present Roth as a sort of “fish out of water” but as a character, he’s hard to get a handle on.  His behavior is erratic and his view is constantly changing – almost too much – to the point where it’s difficult to believe Roth truly believes in anything, which of course raises the question as to why he’s even sticking around to begin with.

I believe the series truly has something special here and I’ll be sticking around for the next two trades at the very least.  We’ll see where it goes from here.