Detective Gabriella Versado is called to the scene of a brutal murder.  A boy who had recently been declared missing is found chopped in half, his lifeless torso sewn to the lower half of a deer carcass.  The crime, albeit an exceptionally grizzly one, is yet another statistic within the husk of the once powerful city of Detroit and it’s not long before the person believed to be responsible for the murder kills again.  With a serial killer on the loose, can Gabi track down and put an end to the rampage or will the body count continue to rise?

Despite the straightforward description above, Lauren Beukes’ Broken Monsters is so much more.  While the murder mystery and the pursuit of a serial killer both form the backbone of the novel, commentaries on the fragility of the American Dream, the permanence of social media and the ever increasing poverty problem flesh it out, giving it certain richness that could have easily been lost in a run of the mill, by-the-book thriller. 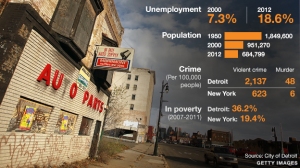 Very much like Stephen King’s Carrie and more recently, Nick Cutter’s The Troop, Beukes pulls information from the world outside Gabi’s case in the form of internet culture, slipping it into the story.  By injecting posts from fictitious Facebook accounts, a subreddit titled “r/detroitmonster” as well as comments through various YouTube videos, Beukes applies a real world feel to the thrilling tale that extends the story beyond the city limits of Detroit.

From beginning to end, Beukes had me hooked and the pages kept flying by.  I can’t wait to see what she does next.  With Broken Monsters, Beukes doesn’t have to worry about eclipsing her previous effort, The Shining Girls; she outshines it (excuse the terrible pun).