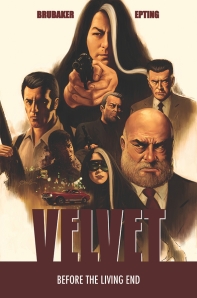 Velvet: Before The Living End

When the top agent for the spy organization ARC-7 is murdered, all evidence points to Velvet Templeton, the unassuming organization’s secretary.  She’s innocent but capturing her is proving difficult and those hot on her trail are meeting the true Velvet, the retired secret agent with the skills to pay the bills.

While recently on vacation in Ottawa, I dropped into The Comic Shoppe to pick up Ed Brubaker and Sean Phillips new noir series The Fade Out.  I couldn’t find it so I asked the clerk if he had any available.  When he came back with issue one, he asked if I had already picked up Brubaker’s new trade, The Velvet.  Even though everyone on Goodreads had been raving about it, it had somehow slipped my mind.  I went in for one issue but came out with two books!  It was like comic book Christmas.

Image is putting out some of the best work in the industry right now (Saga, The Fade Out, Fatale, The Walking Dead) and Velvet is no exception.  Ed Brubaker’s razor sharp writing paired alongside Steve Epting’s beautiful artwork combine to create a compelling vision of mid 20th century cold war hysteria.  There are enough twists and turns in here to keep its audience engaged and it certainly doesn’t hurt to have such jaw-droppingly gorgeous visuals either.