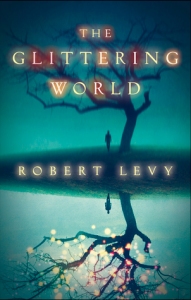 The Glittering World by Robert Levy

A group of four friends travel from New York City to Cape Breton Island to oversee the sale of a home in beautiful Starling Cove.  Blue, the man who inherited the property following his grandmother’s death, needs the cash to pay off some shady mobsters who had funded his expanding restaurant in Brooklyn.  Originally from Cape Breton but having left at a young age, Blue barely recalls his home town outside of a few fleeting memories.  All that changes when he visits his grandmother’s home and visions begin flooding into his brain, threatening to unravel his sanity.

It was an interesting experience to read a story set near my home town.  Local businesses such as Needs (local convenience store) and Frenchy’s (a used clothing outlet) make cameos within the first dozen pages and while the town of Starling Cove doesn’t exist, it’s surrounded by real locations such as Kelly’s Mountain and Baddeck.  While there are a few questionable geographic discrepancies, Levy states in the acknowledgements that things may have shifted in the course of his writing.  It’s difficult to argue a strict adherence to geography given the creation of a fictional town – it’s honestly something I only noticed given that I’m from there and I doubt it takes much away from the story.

For a debut novel, Levy certainly shows talent with regard to pacing.  The story progressed smoothly which had me turning the pages, reading it in large chunks.  As far as criticism goes, I would note that he relied a little too heavily on adjectives in that the story felt overwritten at times.  That being said, I haven’t read a lot of fantasy so it’s possible he’s exploring a style I’m not entirely familiar with.

It was great to see someone use Cape Breton Island as a destination for the weird and wonderful.  I feel that it certainly has untapped potential as a setting for any genre.  Maybe Levy’s The Glittering World will help establish it as Canada’s alternative to Stephen King’s Maine.  Here’s hoping!

One thought on “The Glittering World”

Clown in a Cornfield - Adam Cesare