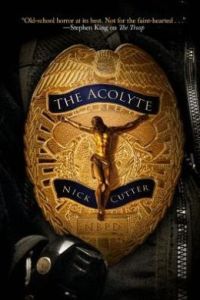 The Acolyte by Nick Cutter.

Jonah Murtag is an Acolyte on the New Bethlehem police force. His job: eradicate all heretical religious faiths, their practitioners, and artefacts. Murtag’s got problems – one of his partners is a zealot, and he’s in love with the other one. Trouble at work, trouble at home. Murtag realizes that you can rob a citizenry of almost anything, but you can’t take away its faith. When a string of bombings paralyzes the city, religious fanatics are initially suspected, but startling clues point to a far more ominous perpetrator. If Murtag doesn’t get things sorted out, the Divine Council will dispatch The Quints, aka: Heaven’s Own Bagmen. The clock is ticking towards doomsday for the Chosen of New Bethlehem. And Jonah Murtag’s got another problem. The biggest and most worrisome… Jonah isn’t a believer any more.

It seems as if with each subsequent book, Cutter is looking to see just how far he can push his audience out of their comfort zone and with The Acolyte, Cutter has written a novel that will burrow under your skin and stay with you long after you put it down.  If you’re looking for an experience similar to The Deep or The Troop, you won’t find it here.  Don’t get me wrong, the stomach churning violence is in full force, but The Acolyte is very much its own story.

Having read most of Cutter/Davidson’s catalogue, no other novel of his has made me squirm nearly as much as The Acolyte.  Some of the scenes are tougher to get through than a two dollar steak and while it’s got a lot to do with just how brutal his imagery can be, it’s more to do with the fact that this scenario is entirely plausible.  With the majority of the world’s violence rooted in religious extremism, an entire western civilization ruled under strict Christian fundamentalism isn’t that hard to imagine, and it’s beyond terrifying.

By no means is The Acolyte an easy read and I certainly don’t mean for that to be a deterrent.  The thing I like most about Cutter is that he challenges me as a reader.  While many authors can write scenes that churn my stomach, it takes a special breed to make those scenes matter, to develop characters and worlds so strongly and slowly just to tear them down so swiftly and in such a devastating manner.