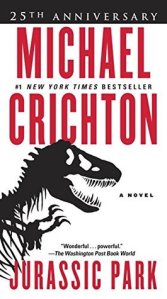 “Scientists are actually preoccupied with accomplishment.  So they are focused on whether they can do something.  They never stop to ask if they should do something.”

In 1993, Steven Spielberg brought dinosaurs to life on the big screen.  At the time, Jurassic Park was so immensely popular that I would be shocked to find someone today who hasn’t seen it.  Now, with the forthcoming release of Jurassic World, dinosaurs are all the rage again.  During a routine trip to the book store, I picked up both Jurassic Park and The Lost World for a pretty good price.

Before I cracked the cover on Jurassic Park, I skimmed through a few reviews online.  Many of the reviews stated that there are pretty noticeable differences between the novel and the movie.  Right away, this had me excited.  I’m a read the book, see the movie kind of guy – not the other way around.  I find that if I’ve seen the movie first, I have a hard time forming my own vision in my head.  Maybe I have no imagination.  Who knows? 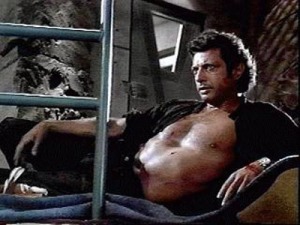 As far as differences go, “noticeable” is an understatement.  While the science behind the dino resurrection stays the same (blood from mosquitoes in amber), many of the characters are completely different.  Don’t worry, Goldblum’s Ian Malcolm is still as self-righteous as ever but the biggest difference is that of John Hammond.  In the movie, he comes across as this overgrown child full of wonder whereas in the book, he’s this arrogant, egotistical man seemingly without compassion.  He’s also infallible.  The best example of this comes from the discussion on the velociraptors.  In the novel, Malcolm calls Hammond out on the fact that everyone had been surprised at just how vicious the raptors were, that they often killed and maimed workers.  It never once entered into Hammond’s head that they could do without one less species running around.

I’ve never read a Crichton novel before but the man can really turn up the tension to eleven.  The best example being the use of the velociraptors.  Like the movie, they’re presented as the story’s main villains (although several characters allude to it not being their fault, that they’re just hunting and eating to survive) and the scenes in which they’re stalking the main characters had me speed reading. 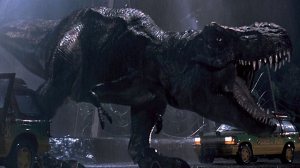 Aside from the raptors, you had that meat grinder on legs, the Tyrannosaurus Rex.  For an eight ton killing machine, he sure can lurk in the shadows.  Just when Alan and the kids (Tim and Lex) think they’ve escaped his wrath, he jumps out and scares the ever loving shit out of them.  This leads to Lex saying on two occasions “I hate him” which made me laugh each time Crichton had her say it.

For as great as the book is, I feel there’s certainly something lost in the pages.  Jurassic Park is a story that is so visual that nothing in the novel could compare to seeing a dinosaur come to life before your eyes on the big screen.  While I felt the original story is a lot stronger than the one presented in the movie, it’s hard to imagine one without the other.  That being said, I could go on and on about all the subtle differences here and there but that would cause this review to extend to an uncomfortable length.  So, I’ll just link to this page here.  I would stay away from it if you intend to read the novel as it’s basically spoilers.

I’ll close by saying if you’ve only ever seen the movie, you NEED to read this book.  The sheer amount of work put forth by Michael Crichton makes you wonder if he was secretly cloning dinosaurs on the side.

One thought on “Jurassic Park”