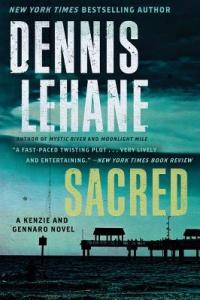 There’s something ugly about the flawless..

Following the events of Darkness, Take My Hand, Patrick Kenzie and Angela Gennaro have shuttered their agency and have begun to pick up the pieces of their shattered lives.  A year has passed when they’re approached (and by approached, I mean drugged and tossed in the back of a van) by an ailing man desperate to find his missing daughter.  The pair are hesitant to accept but when enticed by a hefty sum of cash, it becomes an offer they cannot refuse.

Sacred takes Kenzie and Gennaro down the coastline to sunny, balmy Florida as they investigate a case with more twists and turns than a tangled slinky.  Seriously, this one is all over the place.  I’ve seen a few folks mention that Lehane plays on Raymond Chandler’s The Big Sleep with regards to the plot and I can absolutely see that.  Like Marlowe, Patrick and Angie more or less fall into things as time progresses, playing their cards close to the chest and not having to do a whole lot of detective work outside of putting boots on the ground and knocking on doors.

During the first two novels, Kenzie and Gennaro certainly took their lumps and Sacred is no different.  The duo are beaten and roughed up badly during the story, to the point where a doctor advises Patrick that he start having kids now as he shouldn’t expect a long life.  Can’t say I blame the doctor though.  Hard to anticipate your golden years when you’re constantly avoiding bullets and breaking bones on a regular basis.

It’s going to be tough to top Darkness, Take My Hand and although I found Sacred to be not as strong as its predecessor, I still tore through it relatively quickly.  Unfortunately, there are only six novels in the whole series, so this series is going to be over a hell of a lot sooner than I’d like.