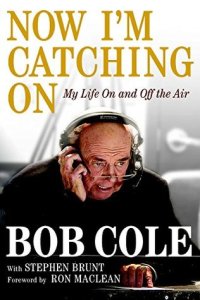 Now I’m Catching On by Bob Cole (with Stephen Brunt).

When I’m not reading crime fiction, I like to kick back with a good hockey or wrestling memoir.  While I no longer watch nearly as much hockey as I used to, I find something about the game endlessly readable.  Like wrestling, hockey has been gifted with a tremendous history that can be equal parts dramatic and comedic.  One thing is for certain, no matter the type of story, it will be deeply fascinating.

That being said there are, however, exceptions.  Take for example Bob Cole’s memoir “Now I’m Catching On”.  Cole’s book details his legendary career as the voice of modern hockey history in Canada.  Alongside frequent collaborators (although none better than Harry Neale) Bob has provided the soundtrack to some of the game’s biggest moments.  From the radio broadcasts of the ‘72 Summit Series to Joe Sakic’s game-clinching Olympic gold medal goal in Salt Lake City, Bob’s remarkable work is woven into the fabric of hockey history.

The problem with the book is that I’m not sure it needs to exist.  I know that sounds harsh, but there isn’t really a lot to chew on here.  In my opinion, Bob spends far too long reminiscing about his life before the game.  There’s so much here about his love of flying, or his love of curling, or his love of fishing and it was just.. dull.  I’m not sure who this information is for.  Wrestling memoirs fall into this trap frequently.  The best ones cut to the chase.

Once Bob gets into his career, the book tends to pick up.  When he gets into the nuance of the job, how he prepares for games and his nightly rituals, the book finds its footing and I found myself gobbling up large chunks of text in a single sitting.  Stories about how he learned to grow as a commentator by treating every mistake as a learning experience can often be inspirational.  No one can say that he isn’t a true professional.  While he’s still prone to go off on tangents that are more or less redundant, he gets back on track swiftly.

Look, I love Bob Cole.  When I think of watching hockey as a kid, he’s the voice that most often pops into my head.  While he may have lost a step in the past few years, the man is in his eighties and still calling games weekly.  That kind of dedication can only come from someone who absolutely loves his job.  “Now I’m Catching On” may not be the best hockey book I’ve read (see Hockey Night Fever), but it has its moments.