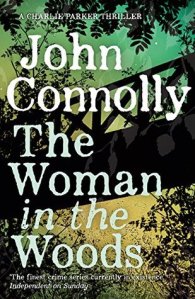 The Woman in the Woods is the sixteenth book in Connolly’s long-running Charlie Parker series yet it somehow feels just as fresh as the first. It’s hard to dive deep into the plot without potentially giving away some light spoilers from prior books, so if you want to remain a virgin to the series, maybe skip this review and go pick up Every Dead Thing already.

The remains of a woman are discovered partially buried in the forest. Evidence suggests that she had given birth shortly before her death but there is no second body to be found. A lawyer takes a special interest in the case and hires Charlie Parker to investigate the whereabouts of the missing child. Unfortunately for Parker, he’s also dealing with the fallout from actions perpetrated by his longtime friend against the son of local crime kingfish Bobby Ocean.

What follows will take Parker through an underground railroad for abused women provided by those that seek to separate them from their tormentors. Hot on his heels is a pair of villains unlike anything Parker has faced before – two merciless killers obsessed with procuring a book dubbed “The Fractured Atlas” that threatens to unmake existence.

Earlier this week, I caught an interview with John from a few years back when he appeared on the podcast, The Bestseller Experiment. Connolly talked about the importance of crafting a compelling character that will make the reader want to return to your long-running mystery series over and over again. Charlie Parker is a wonderful example of patience and long-term planning.

While the series has always maintained elements of the supernatural, ever since Parker’s near death experience at the conclusion of The Wolf in Winter (book twelve), Connolly has ramped up the fear factor maintaining a consistent evolution in storytelling. The Woman in the Woods is no exception. There’s enough gruesome gore and horror to keep series fans satisfied. However, Connolly does not neglect his bread and butter – Parker is at his core a detective and there’s also an intricate mystery here that makes The Woman in the Woods a true page-turner.

To be able to get sixteen books deep in any series is an accomplishment in and of itself, but to keep that series riveting is another thing altogether. Connolly clearly isn’t content just to phone it in and rest on his laurels – this is a tightly-wound, thrilling story that had me on the edge of my seat, dreading the ending knowing I’d have to wait at least another year for the follow-up.

“Keep Looking over your shoulder.”

All the way from Ireland. Complete with bookmark and soundtrack!

One thought on “The Woman in the Woods”