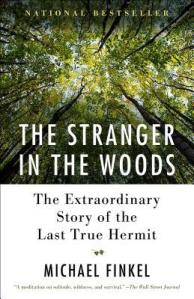 The Stranger In The Woods by Michael Finkel

In 1986, Christopher Thomas Knight, two years removed from high school, drove his new car deep into the woods of Central Maine.  He parked, exited the vehicle and walked deep into the forest where he would stay until found in March 2013.

Over the twenty seven year period, Knight would steal food, clothing and several items needed to ensure his survival.  When all was said and done, Knight estimated he robbed cabin owners nearly a thousand times.  Knight would take care not to cause property damage and the items he took were so inconsequential, that in the beginning, without evidence of a break-in, owners would feel like they were losing their minds believing they were constantly misplacing their belongings.  His careful intentions when stealing from homeowners in no way detracts from his actions, although Knight will be the first to tell you how ashamed he was.  He knew he was wrong but he couldn’t stop.

Following Knight’s arrest, journalist Michael Finkel became enamoured with Knight’s story and wanted to provide a platform for “North Pond Hermit” to tell the world of his decades-long solitary experience.  Through nine one-hour sessions over a seven month period, Finkel, armed with a pen and notepad, met with Knight during his incarceration.  During interviews, it was clear that Knight was uncomfortable with the attention received from Finkel but likely wanted to control his public perception.

Throughout the book, like Finkel, I couldn’t get a handle on Knight.  At times he came across as egotistical, carefully choosing his words to sound like an intellectual and spouting off quotes from classic novels to find parables with modern life.  Those moments had me rolling my eyes so hard I’m surprised they stayed in their sockets.  At other times he appeared anxious and unsure about his place in the world beyond the sticks, desperate to fold into himself away from prying eyes.  Who could blame him?  His first nights in jail were torturous.  He wasn’t harassed by inmates per se – it had more to do with the constant noise when compared to the tranquility of nature.  It reminded me of a new family pet – skittish and on edge.

The author’s conduct near the end of the book made me uncomfortable.  It could be argued that although Knight would be apprehensive when first meeting with Finkel, he would eventually relax and allow the journalist in, so why wouldn’t Finkel continue with this practice after Knight was released from prison?  Finkel attempted to foster a relationship with Knight beyond their informal meetings.  Things didn’t go so well.  It doesn’t detract that much from the book because to be honest, I was interested in how Knight was acclimatising to life as a member of the general public, but Knight’s resistance to discuss his life post-punishment made the author’s continued attempts a little cringeworthy.  Good on Finkel though for allowing everything, warts and all, to hit the pages.

I liked this book and I would recommend it wholeheartedly.  I feel Finkel does a good job of juxtaposing the negative consequences of Knight’s actions against his desire for a simple life; to just be left alone and to quietly exist within his own personal parameters.  We all have days where we have had enough of life; enough of people, and we just want to disappear for a day or two.  The difference is Knight acted upon that craving.  Instead of a few days, he lasted nearly three decades.