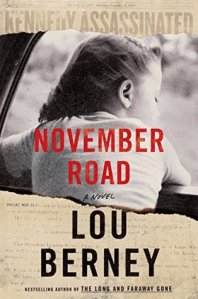 Career criminal Frank Guidry is sent to Dallas to retrieve a getaway car that was to play a part in the assassination of President Kennedy.  The car wasn’t used, so Frank is tasked with retrieving it from the scene of the crime and dumping it into the ocean so that a link cannot be established back to Frank’s boss, Carlos.  Fearing he may be killed following the disposal of the vehicle, Frank heads west for Las Vegas, looking to Carlos’ rival for help leaving the country.

Charlotte Roy is fed up with her life.  Stuck in a dead end marriage with a useless drunk of a husband, Charlotte makes the difficult decision to leave.  She gathers up her two kids as well as the family dog, and hits the road for California looking to shack up with a distant Aunt.  Struck with car troubles in New Mexico, Charlotte and her daughters take out a room in a motel while waiting for her car to hopefully be fixed.

It’s in this motel where Charlotte and Frank meet.

With a killer hot on his heels, Frank looks at Charlotte and her little ones as the perfect cover for his long trip to the West Coast.  Posing as an insurance salesman traveling with his family would certainly help alleviate the bull’s-eye on his back.  Can Frank make it safe and sound on his road to rescue or will his sudden feelings for Charlotte cause all four to meet a dead end?

Make no mistake: this is an excellent read.  Lou Berney effortlessly weaves together multiple threads to craft an intricate and compelling novel that had me captivated from start to finish.  This is a story that is bursting with 1960s Americana and the power of the open road to both change lives and alter destinies.

The three main characters all brought something different to the table.  Charlotte represented hope; a hope for a better life for herself and her two daughters on the gold coast.  Frank represented redemption; a desire to finally make something of himself, even if his intentions were misguided.  Barone, my favorite of the three, represented the past.  Try as he might, Frank was delusional to think he would be able to get a fresh start so easily.  The bodies that Barone leaves in his wake as he relentlessly pursues Frank – and by proxy, Charlotte – across the Southern US adds an undeniable urgency to the novel that allowed the book to maintain a brisk pace.  When the three finally come together, it’s more of a collapse rather than a collision as all three are worn out by their individual journeys.

November Road is tailor-made for a big screen adaptation and I would be shocked if someone didn’t pick up the film rights for this shortly.  Being a screenwriter, I can only imagine Lou had this in mind while writing the story.  I don’t mean to suggest it was meant to be anything other than a book first, but a lot of scenes seemed paced well for a visual medium – especially the few action scenes.   While there aren’t many, the intensity of those scenes helped to raise the stakes for all involved.  It had me speed-reading!

Along with Megan Abbott’s Give Me Your Hand, Lou Berney’s November Road is right up there as the best thing I’ve read in 2018.  This is a noteworthy novel, do yourself a favor and pick this one up when it hits shelves this fall.  You will not be disappointed.

One thought on “November Road”