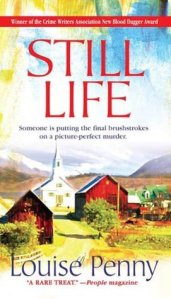 Over Thanksgiving weekend in the small Quebec Township of Three Pines, the body of a beloved resident is found lying amongst the leaves in the forest.  Chief Inspector Armand Gamache of the Sûreté du Québec is called in to investigate what appears to be a murder.  Can this picturesque town and close-knit community survive a rigorous investigation?

A year after losing my chance to meet Louise Penny at Bouchercon, I finally decided to dive into her acclaimed Inspector Gamache mystery series.  I’m not going to lie; I initially had some reservations about it.  I wasn’t worried about the quality, mind you; I just assumed it would be too soft and cozy for my liking.  Thankfully, I was wrong.  Still Life has enough death, backstabbing and deceit to shake a stick at.

Gamache, although a tad dry, is a solid choice to build around.  Penny surrounds Gamache and his crew with a plethora of peculiar players that make up the village in which the murder takes place; a smart move considering Penny has now penned fourteen novels set in Three Pines – can’t have things getting dull now, can we?

For a first novel, Still Life is pretty damn impressive.  I thought the mystery was well-crafted and the twist designed to uncover the culprit was quite clever, so it isn’t exactly a shock that Penny ended up with oodles of awards for this one.  Penny’s sense of humor and her prose are very entertaining – I guess spending your prior career as a journalist can lead to a successful career as a novelist when it comes to writing interesting and funny dialogue.

I have high hopes for the series moving forward as recurring novels set in a small town can only get better as the characterization deepens – at least, I’m hoping so.  Judging by her following at Bouchercon last year, her popularity is remarkable.  I can only imagine how much she’s grown as a writer since this one, so I’m looking forward to reading on.