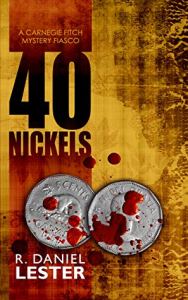 After the events of Dead Clown Blues, Carnegie Fitch is without a workplace and without steady work.  Now he spends his days gulping down coffee from a diner he now considers home base.  Fitch’s dry spell ends when he’s hired to look into a shady street corner snake oil salesman promising miracle cures in exchange for some minor bone loss.  It isn’t long until Fitch is in over his head.  Can he shake the cobwebs in his brain and bring his mark to justice?

While delivering on the same style as its predecessor, 40 Nickels is a different kind of story from Dead Clown Blues.  While Fitch was busy tracking down murderous clowns while also wrapped up in a big top bind in the first novel, this one sees him sweating out drug doses and chasing down cults.  Lester continues to impress with his ability to transport the reader into 1950s Vancouver.  I especially enjoyed the way he wrote a drug-fueled hallucination early in the novel. Fitch, wired out of his mind, gets caught up in a manic episode that sees him stumbling over trolls.  Great stuff.

40 Nickels was a fun – albeit brisk – read that had me glued to my Kindle.  I hope to see more of Fitch down the road – maybe in a longer format.  Although, if I ran into him in a back alley, I wouldn’t want to get mixed up in whatever case he’s hot on the heels of.