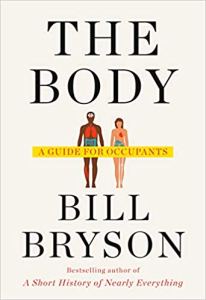 The Body: A Guide for Occupants – Bill Bryson

Bill Bryson’s books are like the literary equivalent of the British panel show Qi.  Like an episode of the long-running series, his books are filled with tidbits of trivia presented in a quirky and humorous way.  While Bryson is often quite ambitious in tackling the subjects that interest him (attempting to explain the universe in 2003’s A Short History of Nearly Everything), no single book should be considered the definitive account on any topic.

As indicated above, the disclaimer also applies to The Body.  Bryson breaks down the human body and attempts to answer questions about what makes us.. us.  The author tackles everything from the top of your head to the tips of your toes and everything in between.  Why do we itch?  Why are we filled with millions of microbes at any given time?  Why are some viruses deadly and others pass through without even a sign they were there?  Why on a long enough timeline, do we all eventually get cancer?  These are just a few of the questions Bryson tackles in his new book.

There were many moments where I audibly gasped reading this book and struggled with whether I should tell my hypochondriac partner what I read.  I did read her one bit about a woman who scratched through her skull and into her brain during sleep and judging by Alaina’s scream, I hesitated to read any more unsettling parts aloud.

It’s amazing the level of sophistication we have only now when it comes to surgery.  Obviously, things evolve, but it is horrific to hear about the irresponsible way we even practiced lobotomies and brain surgery in the mid 1900s.  No sterilization, just cram an icepick into your eye sockets and wiggle it around until you sever key components of the human brain.  There’s no way we could have gotten to where we are now without having to experiment over the years, but I could think of better things to do than trying to transfuse our blood stream with beer and milk.

One of the most interesting parts of the book deals with how the brain interprets the information sent by our eyes.  Bryson writes that it takes one fifth of a second for what we see to be interpreted by the brain.  So we are never truly seeing the present.  Wild, eh?  So, our brain makes up the difference by forecasting what the world will look like a fifth of a second from now.  So, as Bryson says, “we are all living in a world that does not exist yet.”

One thing I will say – I’m no expert in science let alone how the human body works.  Maybe I have somewhat of an idea of how mine struggles to get through the day, but I couldn’t tell you if Bryson made any big errors or mistakes in this book.  Luckily, there are reviews like this one who can speak more authoritatively on the matter.  While the reviewer did point out a few errors, the majority of the book seems to be sound.

I really enjoyed this read and definitely recommend it..  I feel like I learned a lot, or at least things that I can bring up randomly in conversations.  For example, to build Benedict Cumberbatch from scratch would cost you $151,578.46.  So, there’s that.