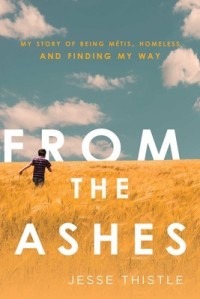 From The Ashes – Jesse Thistle

From The Ashes is the memoir from Indigenous scholar Jesse Thistle about his life on the streets and his struggle with addiction and mental illness.

To say Jesse has had a hard life would be putting it lightly.  From The Ashes is the literary equivalent of a punch to the gut.  You spend the whole book trying to catch your breath but Thistle leaves you gasping for air by offering more and more tales of hardship, conflict and setbacks.  He knew this was no way to live but did he deserve better?  Self-destruction was what he did best.  The drugs were what was driving him to keep going – the need for more and the next high.  It was what kept his head above water even if they mostly held him under.

When I thought Jesse could not sink any lower, I would turn the page and witness yet another fall (one quite literally, in particular).  As he fractured relationships with those who loved and supported him, his destiny was very much out of his control.  Jesse would drift from central Canada to the West and vice versa all the while stuck in traction – moving through the years but stuck in similar spots.  Thistle was a man without a purpose, a soul in purgatory.

This was without a doubt one of the most difficult memoirs I’ve ever read.  Thistle’s brutal honesty and unwillingness to hold back completely rattled me and left me at times with a sense of emptiness and hopelessness.  The sheer fact that this book exists is proof that he survived those hellish years but even then, a part of me wondered how he could possibly pull himself up from the depths he reached.

While I still have four books left to read on the 2020 Canada Reads shortlist, after I put down From the Ashes, I was left with the same feeling as I had when I finished last year’s eventual winner, By Chance Alone.  I would consider this the odds on favorite to win it all, but that will depend on the strength of defender George Canyon and his presence at the round table.

One thought on “From The Ashes”