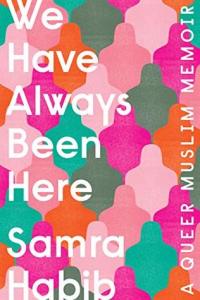 We Have Always Been Here: A Queer Muslim Memoir

We Have Always Been Here is the memoir of Samra Habib, a Pakastani-born Canadian photographer.  It is her life story as she struggled coming to terms with her queer sexuality as a member of the Muslim community.

I say it every year, but the absolute best part about CBC’s annual Canada Reads competition is that I get the chance to check out books and authors that I normally wouldn’t seek out.  There is certainly nothing about Samra’s story that would turn me away from reading her book, but I can guarantee it would not have landed on my radar.  I’m so glad I had the opportunity to read Sarma’s memoir.  I learned a whole lot that I was otherwise blind too.

Habib explains the main difference between the two major denominations of Islam, Sunni and Shiite, and the reasons for their aggression toward one another.  While her life in Pakistan was comfortable, as practicing Ahmadis (a minority Muslim sect), they had to flee Pakistan to escape persecution once their religion was labeled as “non-Muslim”.  Once landing in Canada, they simply had “exchanged one set of anxieties for another”, as Samra would write.  Her family had to quickly adapt to a culture they were not familiar with while navigating the job market as well as integration into the public school system.  Samra would face bullying that was not just limited to name-calling.

Learning at age thirteen that she was to be married to her cousin in an arranged marriage at sixteen, Samra takes the reader through her tumultuous teen years where she had to grow up a lot faster than many of us do.  Struggling to come to terms with her sexual identity inside of a religion that strictly forbids it while both navigating out of an unwanted marriage and also trying to keep her parents happy was not an easy task to say the least.  Habib’s story is at times heartbreaking but also triumphant in how she would find the strength to simply live as herself.