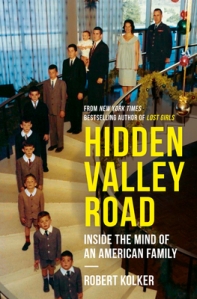 Hidden Valley Road: Inside the Mind of an American Family

Hidden Valley Road tells the true story of the Mimi and Don Galvin and their twelve children, six of whom would develop schizophrenia.  Through hundreds of hours of interviews with the surviving family members as well as medical professionals, author Robert Kolker (The Lost Girls) paints a portrait of a debilitating and heartbreaking mental illness that destroys not only the lives of those afflicted but the lives of family members and loved ones.

Last year, I watched an episode of Vice TV’s Dark Side of the Ring (a documentary series spotlighting the dreadful history of the wrestling industry) that focused on the tragic and horrifying events that had befallen the Von Erich family.  Just as you think the family couldn’t take another catastrophe, they would be blindsided by more misfortune.  That episode made me wonder just how a father or a mother could continue to push forward in the shadow of such overwhelming loss.   The same can be said for Mimi and Don – two parents who had to watch their children succumb to a destructive disease that would completely consume their lives.  One is bad enough – but six?

This is a particularly heart-wrenching read in so many ways.  You have the boys who were helpless to stop the disease from completely shattering their lives.  You have the parents who have to struggle both to provide for a family as well as to manage the sheer amount of chaos contained within day to day life.  You have the other six children who are expected to live their own lives all while worrying about a potential ticking time bomb in their own brains in wondering, “am I next?”

I found the circumstances surrounding each child’s psychotic break gripping and fascinating.  Kolker did an admirable job getting into the mind of each Galvin boy by laying out the completely random nonsense they would say out loud to anyone who would listen.  That said, I did find the sections dealing specifically with the research alongside the struggle to understand how and why the disease operates more than a little dull and at times difficult to follow.  To be honest, I didn’t even know exactly what schizophrenia was until I read this book.  While I appreciated the explanations, when Kolker started writing about mapping out the human genome and discovering the specific genes that led to the illness’ development, I became more than a little lost on a few occasions.  That’s probably on me though.  I don’t know how one would write about the research and science of the disease without getting into a lot of jargon.

With Hidden Valley Road, Robert Kolker put forth a commendable effort to get inside the madness of mental illness.  It is an engaging read that will likely land on my list of top non-fiction at year’s end.