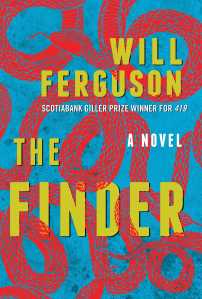 The Finder – Will Ferguson

In The Finder, Ferguson brings us the story of a mysterious outlaw who travels the world looking for items that time has forgotten.  Hot on his heels is Gaddy Rhodes, a determined Interpol agent looking to bring him down.  Elsewhere, the novel connects with a travel writer and a photojournalist stationed in Christchurch, New Zealand during the 2011 destructive earthquake.

I had a hard time with this one.  I really loved the idea of a person who seeks out and retrieves items like Buddy Holly’s glasses to turn around and sell to the highest bidder, but I thought that the story itself was like a pot that boiled over in that there was just too much going on.  I appreciate Ferguson’s drive to create this massive cat-and-mouse saga that spans decades and continents, but it just didn’t do it for me.  The only character I really found myself identifying with and rooting for was Gaddy and when Ferguson would shift from her to the events in New Zealand, I had a hard time staying focused.  I would have rather just had a story about her and her alone.

I will say that Ferguson has a gift for writing compelling dialogue.  Even though I didn’t much care for his storyline, I thought Thomas Rafferty was an interesting character and would have liked a story on him alone.  Basically, it seems like The Finder is two stories that would have been better served as one or the other.  I understand their connection and why it had to be written this way, but I would have preferred more of a focus if I’m being honest.

The Finder is scheduled for release on September 01st, 2020.