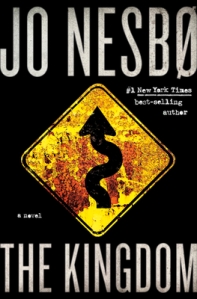 The Kingdom follows two brothers, Carl and Roy Opgard, as they attempt to bring prosperity to their sleepy Norwegian town.  But at what cost?  Carl and his new wife Shannon, have a great idea – construct a picturesque hotel on the beautiful mountainside overlooking the village – but their financing plan and the two brothers’ troubled past may prevent future success.  Can Carl and Roy keep their history buried or will the ghosts of their bygone times return to haunt them?

I received an advanced copy from the publisher in exchange for a review.

Jo Nesbo is an author I have little experience with when you consider the breadth of his work.  I’ve read a few of his stand-alone novels as well as the first two books in his acclaimed Harry Hole series and while I wasn’t particularly blown away, his new novel THE KINGDOM, is far and away the best of his work I’ve yet to read.

This book gripped me from start to finish.  Roy, the narrator and main protagonist, was a truly compelling character.  It’s going to sound strange when you consider how both the character and the story eventually unfolds, but I saw a lot of myself in Roy.  The way in which Nesbo wrote him as being socially awkward as well as deeply introverted allowed me to relate to Roy’s story on a whole other level.

Nesbo structures the book in such a way that reminded me of Gillian Flynn’s GONE GIRL.  There isn’t a massive twist on the level of Flynn’s critically acclaimed novel, but in the sense that there’s a heavily guarded secret at bay.  Nesbo kept me guessing on which way an integral part of the brothers’ past would unfold.  At times, this had me racing to get to where he would finally shine a light on the guilty party.  That is to say, this is a hell of a page-turner.

There’s just no setting quite like the cold, unforgiving winters of Scandinavia, is there?  The rough environment and punishing weather helped to shape the townsfolk with tough exteriors and cynical attitudes.  Many of the novel’s more brutal moments are juxtaposed against freezing temperatures and unyielding darkness.  The violence burrowed under my skin looking for somewhere warm to hide out and stick with me between sittings.

Jo Nesbo’s The Kingdom is a book worthy of your attention as we all settle in and hunker down for a long winter ahead.  This is the kind of story just begging for a film adaptation and with the right cast and director, this could be a big one not unlike David Fincher’s crack at The Girl with the Dragon Tattoo.  Maybe I’ll start digging into Nesbo’s extensive catalog.

FYI – I’m not one to usually offer up content warnings within my reviews, but this story does deal heavily with childhood sexual abuse and if you’re not one who can stomach that, it might be best to give this one a pass.

One thought on “The Kingdom”