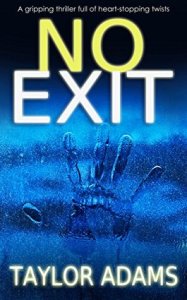 It’s the day before Christmas Eve and Darby Thorne is racing home through a blizzard in the Colorado Mountains.  When the route becomes impassible, Darby is forced to seek shelter inside a roadside rest stop.  Upon her arrival, she finds four others also waiting out the storm.  As she ventures back outside, hoping to get a cell signal, she spots a little girl locked inside of a cage within the back of a van.  Wanting to help, she has to uncover the guilty party among her fellow stranded.  But, then what?

This is a tough one to review hopefully without giving away too much.  I will say, that I am somewhat proud of myself that I figured out where this was going pretty early on, but that doesn’t make it any less of a page-turner.  Darby has a tough up-hill battle from the very beginning.  Not only are the events within and around the cabin dangerous enough, she has the worry of reaching her family while her mother undergoes treatment for stage four cancer.  There’s a strong urgency to everything that happens here making putting the book down difficult.  You just need to know what happens next!

I will say that the twist is revealed fairly early in the novel, so I was intrigued to see how Taylor Adams would handle the pacing of a somewhat locked room setting with roughly seventy percent of the novel remaining.  He did a good job though.  Things move along swiftly and the character development through flashbacks and dialogue help you forget that you’re within a fairly claustrophobic environment.

NO EXIT really feels like one of those late 90s/early 2000s thriller movies that you don’t often see these days before everything released seemingly became a sequel or a superhero movie (not that I have anything against the MCU).  I say that now, despite the fact that NO EXIT has been optioned for a film adaptation – so maybe we’ll see a comeback of sorts.