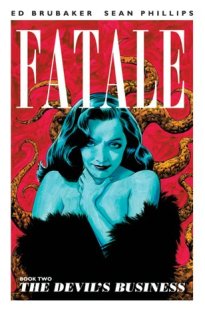 The setting moves to sleazy 1970s Hollywood where Jo is living the life of a rich recluse. As we’ve grown to know, Josephine is never far from controversy and when a B-list actor and his butchered friend nearly fall into her lap, Jo must try to avoid all the violence that they inadvertently bring with them.I had to have my jaw surgically reattached after I finished the first volume of Fatale. Once again, Brubaker and Phillips left me with a vast appreciation for the entertainment that they provide us. They are true masters of their craft.However, all the greats fail to deliver once or twice, even Wayne Gretzky was held scoreless every now and then. Continuing with my hockey reference, With volume two, the duo played a great game but didn’t really put on a memorable performance. But that’s the thing about a player as solid as Gretzky, you can allow for off nights but the fact is, he’s still Wayne Gretzky, and you know you can’t keep a good guy down for long.The collected issues (6-10) contained within, and the main story told, really came across as, for lack of a better word, messy. I didn’t quite feel that connection with Miles as I have with characters they’ve written in the past and found myself pondering what was happening with Lash in present day. I suppose the 70s Hollywood/Satanic Cult stuff just didn’t grab my attention long enough to hold my interest.I have no doubt that this series will rebound and become something special. Maybe we’re just in that lull period in a story that sometimes solely exists to get characters from point A to point B. While that’s not something I’m used to with regards to these guys, it’s something I’m willing to look past (for once).