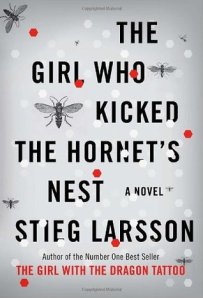 The Girl Who Kicked The Hornet’s Nest

You and I were on such great terms! I loved the first two parts of Millennium series, especially the second installment.. and although some people found it annoying, your style of writing about every single thing everyone did in the run of a day was enjoyable.

Brandon woke up, turned off the alarm clock. He stepped out of bed and walked to the kitchen. He took out a loaf of bread and put two slices in the toaster. He waited until the bread was browned nicely on both sides and grabbed the butter. Applying a generous amount, he was standing before his breakfast.

There’s something about that I just like – I don’t know why..I just do.

Then why did I have such a hard time staying awake during your third novel? Honestly, I fell asleep no less than 5 times trying to read this. Your pace and passion for writing about Lisbeth seemed to disappear this time around. Even Michael Bloomkvist took a backseat in this one. How did you make a police procedural novel so dull? Arg, I feel so let down.

Overall, I had a general feeling that this novel wasn’t entirely necessary. I guess with the way things were left at the end of The Girl Who Played with Fire, there was some interest in how this all would wrap up. I, for one, would have been happy leaving it at that but that’s just me.

While I was satisfied with the general outcome and the series’ conclusion, it was just the journey to get there that bothered me so much. It should be noted that this doesn’t affect my view of your first two entries – I still love those books and because of that, I actually felt guilty not rating this higher.

I still eagerly anticipate the arrival of your American film adaptations. Honestly, I don’t even know why I’m writing this review addressed to you. It’s not like you can read it.

** On another note, this may be my own fault, but I had a very difficult time keeping track of the characters. I mean, there were A LOT of people in this novel. All of which had names I continuously lost track of. I felt like I should have had a notebook next to me while reading. That’s no fault of Stieg’s – I’m sure he didn’t anticipate a guy from Eastern Canada who once became lost while watching this movie to read his novel.