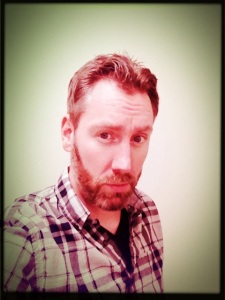 I read a book late in 2012 titled, “Dead Harvest”.  I loved the uniqueness of a war fought between the forces of heaven and hell set within the world of crime-pulp.  On a whim, I reached out to the book’s author, Chris F. Holm.  I was overjoyed that he agreed to answer a few questions for Every Read Thing.  Here’s his bio:

Chris F. Holm was born in Syracuse, New York, the grandson of a cop who passed along his passion for crime fiction. His work has appeared in such publications as Ellery Queen’s Mystery Magazine, Alfred Hitchcock’s Mystery Magazine, Needle: A Magazine of Noir, and THE BEST AMERICAN MYSTERY STORIES 2011. He’s been an Anthony Award nominee, a Derringer Award finalist, and a Spinetingler Award winner. His Collector novels, published by Angry Robot books, recast the battle between heaven and hell as Golden Era crime pulp. He lives on the coast of Maine with his lovely wife and a noisy, noisy cat.

Thanks for giving me the opportunity to throw a few questions your way.  Dead Harvest had easily been one of the better books I had read in 2012.

Thanks very much for having me! It’s gratifying folks seem to be connecting with it. I thought when I was writing it I might wind up out on this pulp-crime-meets-demony-weirdness limb all by my lonesome.

Tell us a little about The Collector series.

The Collector series recasts the battle between heaven and hell as Golden Era crime pulp. Picture angels in Crown Vics and demons running speakeasies, and you’ve got the gist. It centers around an undead guy by the name of Sam Thornton, who — by dint of a devil’s bargain made to save his dying wife — now spends his afterlife collecting the souls of the damned and delivering them to hell.

I loved the idea of Sam inheriting certain traits of the recently deceased upon possessing their body.  How did that idea come about?

I think that might’ve been my day job bleeding through into my writing a little bit. My background’s not in writing, it’s in biology. And one thing I find fascinating about Sam’s noncorporeal predicament (his body’s long dead, requiring him to possess the living or the newly dead to get around) is the biological aspect of possession. The human body is a finely tuned machine, and much of what it does isn’t regulated by the conscious mind. Anybody with a phobia can tell you all the logic in the world won’t calm that fight-or-flight response when it kicks in. So too it is for Sam — only in his case, the phobias are on loan from whatever meat-suit he’s walking around in. The physicality of the meat-suits he walks around in is also an issue — for example, an athlete’s gonna have muscle-memory going for him that a couch-potato wouldn’t. And in the third Collector novel, which I just finished, Sam has the experience of trying to make a foreign vessel’s mouth speak words in English for the first time. It ain’t easy, because it’s not what those muscles are conditioned to do.

I thought the inclusion of Lilith (or Eve) as Sam’s handler was a great choice.  Where did the inspiration come from to further vilify the Garden of Eden outcast?

Actually, I didn’t have to further vilify her. Lilith, as I write her, has existed for well over a thousand years. You’d be shocked to discover how much of what I’ve incorporated into the cosmology of the Collector universe is plucked straight from religious folklore. And Lilith is perhaps my biggest theft.

To be clear, Lilith and Eve aren’t one and the same. The first recorded mention of Lilith is in the Babylonian Talmud, in which she’s described merely as a female demon. Jewish folklore dating back to around the 8th century burnishes Lilith’s legend considerably, describing her as Adam’s first wife, predating Eve. It’s said that unlike Eve, who was made from Adam’s rib, Lilith was crafted from the same earth God used to make Adam, but she was cast out of Paradise when she refused to assume a subservient role as his wife. Her sexual appetites were reportedly voracious, and upon her banishment, she mated with countless fallen angels, giving birth to scores of incubi and succubi. It seemed to me a hard-bitten, sexually aggressive woman who refused to cow to a patriarchal world-order was pretty much the archetype for the femme fatale of classic pulp — which makes sense, given that the pulps were nothing more than the lurid morality tales of their day. Once I stumbled upon the legend of Lilith, I knew she’d be integral to the story I wanted to tell.

When you set out to write Dead Harvest, did you always plan on a series?

Absolutely. I’d been casting about for a character rich enough to sustain an open-ended series of the type Chandler and Hammett wrote — a guy readers might want to spend some time with. For the longest while, I came up blank. Then Sam hit me in a flash, and I was off to the races. I was halfway through writing the second book before I ever sold the first.

In your website bio, you had indicated that your grandfather had passed down a love of crime fiction.  Any particular authors he introduced to you?

My grandfather was big on Lawrence Sanders, Ed McBain, Thomas Harris, Patricia Cornwell, Robert Parker, and Joseph Wambaugh, just to name a few. He went through paperbacks like you wouldn’t believe. He never said too much about them. Mostly just a terse “Not bad,” or “Not as good as his last one.” But those authors provided a jumping-off point for me, and led me to many of my all-time favorite authors. In that way, Papa’s influence on my writing was immeasurable.

I particularly enjoyed the nod to Lawrence Block’s Scudder series in Dead Harvest.  Has Block’s iconic character had an influence in your writing?

Well, Block certainly has; he’s one of my all-time faves. I’d go so far as to say he’s the greatest living crime writer. One of the great thrills of my writing career was being published alongside him in Ellery Queen’s Mystery Magazine a bunch of years back. As for Scudder, I suppose he and Sam share a certain earned world-weariness, but that’s not why I dropped the reference. As far as I’m concerned, the Collector universe isn’t the real world plus angels and demons — it’s the world of classic pulp plus angels and demons. And as such, the New York of DEAD HARVEST isn’t the New York of our world — it’s the New York of Scudder’s. A little dingier than ours. A little harsher. A little rougher around the edges.

I’m a big fan of Angry Robot Books and I think they’re one of the better publishing houses around.  How did your partnership come to exist?

The answer’s kinda boring. My agent shopped around DEAD HARVEST, and they bit. But I’ll tell you what: although I was familiar with some of the (fantastic) books they’d put out before I signed with them, I had no idea how lucky I was to wind up there. They’re no kidding some of the sharpest, nicest, most passionate folks I’ve ever had the pleasure of working with. It’s no wonder they’ve got such a kickass stable of writers. I couldn’t have asked for a better home for my series.

Man. There’ve been so many. But if I had to pick one, I’d have to go with DARE ME, by Megan Abbott. The prose is breathtaking. The voice, perfection. It’s a stunning accomplishment of a novel, and if there’s any justice in the world, folks will be reading it for decades to come.

Some days, it’s THE BIG SLEEP. Others, Tim Powers’ LAST CALL. Others still… no. I’ll leave it at two for now. Otherwise, we’ll be here all day.

I feel like The Collector series is just begging to be transferred to a visual medium.  If the opportunity arose, would you prefer a TV series or a movie adaptation?  In regards to either one, do you have any casting choices in mind?

Let me preface this answer with the following disclaimer: I would be delighted to see my series adapted to big screen or little. Hell, if someone wants to do THE WRONG GOODBYE: THE OFF-OFF-OFF-BROADWAY MUSICAL, I say bring it on.That said, I find I’m a bigger fan these days of TV than of movies. This past decade or so, television’s gotten far more adept at serialized storytelling, and really blown the doors off in terms of what folks thought the medium was capable of. As a consequence, I think television’s more novelistic in its approach to storytelling than film. I’d love to see Sam on the small screen, although he’d have to wind up on a cable network or else work on cleaning up his language some.As far as casting, I confess I’m lousy at it; the characters are no one but themselves in my head. I’ve heard everyone from Josh Jackson to Robert Downey Jr. thrown out as suggestions to play Sam, and for the record, either’d work for me. Fan frontrunners for Lilith include Christina Hendricks and Melinda Clarke. Wouldn’t gripe about those, either.

The third book in the Collector series, The Big Reap, is due to hit store shelves in July of 2013.  What’s next for Chris F. Holm following its anticipated release?

Right this sec, I’m working on a short fiction collection, my second, which I hope to have released in a couple weeks. I’m looking to start shopping a mainstream thriller based on my short story “The Hitter,” which appeared in THE BEST AMERICAN MYSTERY STORIES 2011, as well as a creepy little small-town-murder/ghost-story called PROOF. And I expect I’ll be starting work on a new novel as soon as the short collection’s out the door: a creepy science-y conspiracy tale called CIRCLES. After that, who knows? Maybe I’ll take a nap. Writing plus day job equals serious sleep-deprivation.

Check out Chis’ blog – http://www.chrisfholm.com
Pick up Dead Harvest and the sequel, The Wrong Goodbye: