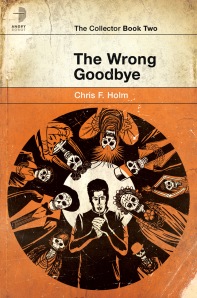 Following Dead Harvest, what do you give the guy who nearly brought upon the apocalypse?  Why, a second chance of course!

Sam Thornton is tasked with the collection of a soul belonging to a feared drug lord.  Following a meeting with an old friend and fellow collector, the soul Sam had acquired goes missing; replaced with that of another.  The search for his stolen property takes Sam in unexpected directions as well as providing unwanted attention from those he’d like to avoid.  As Sam’s journey continues, the window for retrieving the soul starts to close and his opportunity to stop yet another potential apocalyptic event becomes less and less likely.

If you read my review, you’d already be aware of how much I enjoyed Dead Harvest.  When I was told the sequel – The Wrong Goodbye – was just as good, if not better, you couldn’t hold me back from picking it up.

With The Wrong Goodbye, I feel like the series gained a lot of ground in terms of Sam’s development.  Sam laments about being stuck in his role as a collector but doesn’t whine and mope about it.  He knows that he’ll always have Lillith down his neck and with the added pressure of those who granted him a reprieve following his actions in book one, he knows he can’t afford to make a mistake.  Despite these factors that he must always be mindful of, you never feel like he loses any of what makes him a great character.  He’s still a smart-ass and he still lets his darker, more comedic side come out to play.  In fact, there’s this:

“He slammed me into the rock wall behind me.  My head hit so hard I thought I’d puke.  Then I did puke, so, you know, yay for being right.”

As a Collector, the path laid out before him is only wide enough for one person.  People may drift in and out of his life but given the nature of his employment, they’re never around for long.  Given his circumstances, you could grab the low hanging fruit and fill Sam’s attitude with gloom and doom but it’s really important to make him an interesting and entertaining character by mixing it up a bit.

There’s a scene where Sam and his sidekick, Gio, are traveling in a stolen vehicle.  Gio brings up the past and asks Sam about his wife.  Sam’s response, tightening his grip around the steering wheel and thinking twice about dragging his history out, reinforces why despite his witty remarks and snappy dialogue, at his core he’ll always be a tragic figure.  Thornton has the rest of eternity to wonder if the choice he made was the right one; something that will most likely never be easier for him to deal with.

Overall, I feel like this series is only getting stronger.  The third book is due out this summer and again, has a fantastic cover.  One thing I believe I didn’t speak about in my review for Dead Harvest was it’s excellent cover art.  The designs provided by Amazing 15 continues a trend of vintage-style artwork.

Check out my interview with Chris.
Review of Dead Harvest.

4 thoughts on “The Wrong Goodbye”