The Ones That Stuck
Chris F. Holm

A little while back, Brandon emailed me to ask if I’d be willing to write a guest post about short stories that’ve stuck with me over the years. This may have been a strategic error on his part. See, I’m nuts about a good short story – so much so, I had trouble winnowing this list down to (scrolls, counts) a mere eight. (Nine, if you count honorable mentions. Which I don’t.)

Short stories are a hard sell for some, I know, so where possible (and legal) I’ve included links for you to check them out yourselves. Think you don’t like shorts? See if you can say that after you’ve read these…

I’ve been a Poe fan ever since I was little – which, upon reflection, explains a lot. At his best – as he is in both “The Tell-Tale Heart” and “The Cask of Amontillado” – Poe may well have been the greatest short story writer to’ve ever lived. I couldn’t have been older than ten when I first read these stories, and they haunt me to this day. I hesitate to relate the plot of either; if you haven’t had the pleasure of reading them, click through and do so.

Oh, and as a fan of detective fiction, I’d be remiss if I didn’t give honorable mention to Poe’s “The Murders in the Rue Morgue,” which is widely credited with inventing the subgenre. Its dénouement, I fear, might strike modern readers as somewhat arbitrary (not to mention a little silly), but the tale’s historical import cannot be overstated. Simply put, were it not for Poe’s Dupin, we never would have had Doyle’s Holmes or Christie’s Poirot.

When I was researching this post, I discovered to my delight that “The Colour Out of Space” was Lovecraft’s personal favorite among his works. It’s not as flashy or well-known as his Cthulhu Mythos stories, but I think it’s his best-written and most unsettling tale. Lovecraft saw the cosmos as a cruel, uncaring place, one whose sheer indifference toward humankind thwarted our every attempt to ascribe meaning to our lives. Click through and for a couple thousand words, you’ll see it that way, too.

Raymond Chandler is, to my mind, one of the greatest prose stylists of the last century, and never is that better evidenced than in the opening paragraph of “Red Wind”:

“There was a desert wind blowing that night. It was one of those hot dry Santa Ana’s that come down through the mountain passes and curl your hair and make your nerves jump and your skin itch. On nights like that every booze party ends in a fight. Meek little wives feel the edge of the carving knife and study their husbands’ necks. Anything can happen. You can even get a full glass of beer at a cocktail lounge.”

At once wry, thrilling, and evocative, that paragraph – and the story that follows – demonstrates Chandler’s mastery of short-form storytelling. My copy resides in RAYMOND CHANDLER: COLLECTED STORIES, a tome I consider essential to anyone with an interest in short stories.

Reading Tim Powers’ “Night Moves,” you can’t help but be struck by the fact he must be a “Red Wind” fan as well. Powers’ tale begins with a paragraph about the Santa Ana winds doubtless conceived as an homage to Chandler’s, which in this case foreshadows not violence but Powers’ distinctive, haunting brand of weird.

The story itself is chock full of gorgeous prose; vivid, memorable characters; an achingly beautiful sense of melancholy; and – because it is a Powers tale, after all – a thrilling glimpse of the magic that surrounds us. If you’d like to check it out, it’s available in a stunning collection called STRANGE ITINERARIES.

I happened upon this story in 2007, posted on a now-defunct critique blog called the Crapometer. The idea was, folks submitted their stories, chapters, queries, or whatever, and then other folks could chime in with their two cents in the comments.

As I recall, the comments on “The Last Dance” were mixed, which demonstrates the sad fact that some people have no taste, because it knocked me flat. It was head-and-shoulders above anything else on the site. It was head-and-shoulders above most other shorts I’ve read. I liked it so much, in fact, I sought out Stuart’s blog, and dropped him a line to say so, kicking off a correspondence that continues to this day.

Some time later, Stuart placed “The Last Dance” with Thuglit. You can read it here. An agent by the name of Nat Sobel liked it so much when he read it, he dropped Stuart a line, too. Now Stuart’s got a handful of magnificent, critically acclaimed thrillers to his name, and a movie in the works as well. So much for those mixed comments.

My buddy David Cranmer has one hell of an eye for talent. He’s the editor of Beat to a Pulp, whose Weekly Punch features a new short story every week. Back in ’09, David shot me an email that read (with apologies to David for quoting from personal correspondence), “Hilary Davidson is this week’s Punch and you have to read this one. The lady is going to be a huge success.”

So I read it. Holy hell, was it good. Dark, mysterious, and with a gut-punch of a twist I never saw coming. I left a comment saying so, and Hilary was kind enough to write a thank-you note in return. Now, I’m lucky enough to count her a friend, which is doubly cool because it turns out David was right: “Insatiable” won the Spinetingler for Best Short Story on the Web, and Hilary’s debut novel, THE DAMAGE DONE, won the Anthony and the Crimespree Award, as well as being a finalist for both the Macavity and the Arthur Ellis. Sadly, “Insatiable” no longer appears to be online, but maybe if we bug Hilary enough, she’ll put out a short collection of her own.

One of the benefits of having talented friends is getting to check out cool stuff before it finds its way out into the world. So it is with Weddle’s “Purple Hulls.” Steve sent me this one in the middle of a horrible day, and it was so damned pretty it changed my mood entirely. The story’s by turns lyrical and brutal, sweet and sad, and it’s hands-down one of the best I’ve ever read.

I know it’s cruel to tease you with a rave about a tale you can’t check out for yourself, but with luck, you’ll soon get the chance. “Purple Hulls” is part of COUNTRY HARDBALL, Steve’s stellar novel-in-stories; it’s only a matter of time before a publisher realizes his genius and snatches it up.

I’d like to thank Chris for stopping by and sharing the short stories that made an impact on him throughout the years.

Chris has a new book featuring a collection of short stories named Dead Letters: Stories of Murder & Mayhem.  You can download it onto your Amazon Kindle right here!  You can also grab his first collection, 8 Pounds.

Check out my interview with Chris as well as my review of Dead Harvest & The Wrong Goodbye.

6 thoughts on “The Ones That Stuck – Guest Post by Chris F. Holm” 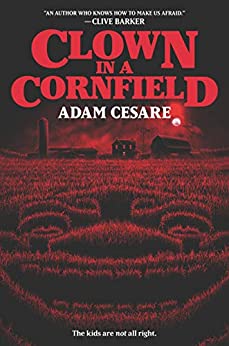 Clown in a Cornfield - Adam Cesare