I recently had the opportunity to chat with Duane Swierczynski, author of the recently released Point & Shoot.  Point & Shoot is the finale to the Charlie Hardie trilogy which exceeded my already very high expectations.

If someone had to put together a criminal profile on Duane Swierczynski, what would it say?

I wouldn’t be any kind of criminal if I gave away all my secrets, now would I? Actually I’m a failed criminal. If I had the stones to pull off a heist or a murder spree, I probably wouldn’t bother writing about it.

In Point & Shoot, the Charlie Hardie series comes to a conclusion.  Did you have any last minute reservations about ending it?  I’m secretly hoping you’re going to tell me it’s not over.

No reservations at all, because the series was always planned as a trilogy. I knew more or less where ol’ Chuck would end up by the end of the third book, though I did build in some trapdoors for possible prequels (featuring Hardie and his ex-partner) and sequels (featuring his son, Siege). But I have no intention of writing either anytime soon. I’m like a cat—easily distracted by the next shiny thing.

Not taking anything away from Fun & Games or Hell & Gone but I think Point & Shoot is the best of the trilogy.  In my experience I’ve sometimes found that by the third book in a trilogy, a series can often start to show it’s limitations.  Did you feel any pressure with Point & Shoot or did you already know where you were headed right from the beginning?

I patterned the trilogy after action movie trilogies, which seem to fall into loose patterns. The first installment is usually the crowd pleaser; the second installment often goes darker and weirder; and the third usually tries to reclaim the glory of the first installment by bringing back familiar characters, but ends up being even more over the top and, frankly, absurd. (Die Hard, looking at you.) I also tried to keep things interesting by making each book a different sub genre (or two). I don’t know… isn’t this how you’re supposed to write series?

One thing I enjoy from your work is your impressive ear for dialogue.  I really appreciate it when a writer can bring their characters to life with such ease.  Has that always come easy to you?

Maybe that comes from my experience as a journalist? I’m not sure it comes easy, but I do try to listen more than speak. Once a character really starts talking to me, it becomes a bit easier to pick up on their particular speech patterns.

With The Blonde, Severance Package and The Wheelman, you’ve crafted a universe in which all three novels can exist.  With certain characters carrying over throughout the books, are you planning any more stories within your Philadelphia?

The new book is my most Philadelphia-centric of them all, but I don’t plan to bringing in previous characters or little winks to the other books… though I’ll admit I was tempted.

Your books all seem to share a similar style in terms of the amount of action and violence, were you inspired by any books or movies growing up that led you in that direction?

Lots of 70s TV shows like S.W.A.T., Kung Fu and Starsky and Hutch, followed by tons of glorious 80s action movies, horror movies, thrillers, sci-fi flicks, etc. All of this stuff was swirling around in my head even before I read my first proper novels, and I suppose it turned me into an action story junkie. I wanted stories that moved, you know?

You’ve written for a handful of the most iconic comic book characters in history including (but not limited to) Deadpool, The Punisher and Iron Fist.  Who do you most enjoy creating stories for?

I like them all for different reasons—and right now I’m having a blast with more crime-centric characters like X (for Dark Horse) and Judge Dredd (for IDW). What’s really nice is that I get to play in a certain sandbox for a while, then move on to something else. I’m not sure I’ll ever be a comic writer with a long, long run on just one thing. There’s too much other stuff I want to do. 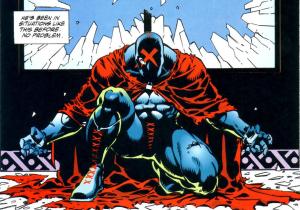 Are there any characters you want to work with?

I don’t have a wish list or anything, no. If an opportunity comes up, and I have a take that excites me, then I’ll give it a go.

I wanted to get your take on the upcoming Deadpool video game due out this fall.  Have you seen any of the promotional material or been involved in the development at all? Any impressions you’d like to share?

I haven’t heard a thing about it. I’m not much of a gamer, aside from a Grand Theft Auto III binge a decade ago.

You’ve got a new series launching this May from Dark Horse Comics.  Tell us about X.

X is a vigilante shrouded in mystery—and that’s the great fun of this series, because we don’t know much about him. He has one eye—we think. He uses lock his mask on and refuses to remove it until his “missions” are complete. And he likes to make very, very violent public examples of people. In this series, we encounter him through the eyes of an ex-journalist named Leigh Ferguson, and what’s cool is that as she puts things together, so does the reader.

Being from Philadelphia, I have to assume you’re a fan of the Rocky movies.  I’m steadfast in my devotion to Rocky IV, do you have a favorite or do you just love them all equally (aside from V)?

The first will always be the best. Though I was very impressed with the final installment—Rocky Balboa.

What have you been reading lately?  Any authors or books you’d like to shout out?

Right now I’m reading an Italian crime noir called At the End of a Dull Day by Massimo Carlotto, and before that I read Chester Himes’ Cotton Comes to Harlem.  Both are stellar.

What’s on tap for Duane Swierczynski?

Well, there’s that in-progress novel I mentioned earlier, and a few other things I can’t discuss quite yet (I know, I know, I’m no fun). But this summer’s all about keeping my head in the new novel. They have a tendency to take over my life, once they’re underway…

One thought on “Interview – Duane Swierczynski”