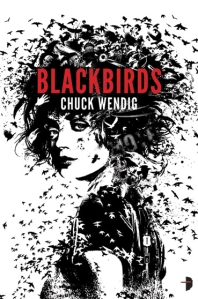 Miriam Black doesn’t want your help.  She’s a loner by choice.  Why?  Well, Miriam can tell you with 100% accuracy when and how you’re going to die.  With a little simple skin on skin action, she can peer into the future and find out when you’re going to meet your maker.  Big deal right?  If Miriam knows how you’re going to die, why doesn’t she just become a superhero and save the day?  The thing is – fate ain’t got time for superheroes.  What fate wants, fate gets and avoiding the grim reaper isn’t something she’s equipped to deal with.

Unfortunately for Miriam, she can’t always choose her battles.  Crossing paths with a kindly trucker forces her to let her guard down which allows a friendship to take root.  However, when she sees how he’ll kick the bucket, she opts to get as far away as possible, hoping to somehow avoid the whole mess altogether.  Remember what I said before?  How fate always gets its way?

This book was straight up awesome.  Wendig has a way with words; like he’s cooking with literary hot sauce.  And don’t give me any of that crap about how Wendig wrote Miriam like she’s a dude; as if there’s any set way a man/woman is supposed to act within fiction.  Miriam is Miriam.  She’s a loose cannon.  She’s fun to read, she’s a breath of fresh air and the girl can trade verbal barbs with the best of them.  Seriously, there are some of the best one-liners in here.  If you’re not laughing out loud at what Wendig throws at you, your funny bone is broken.

Not only is Miriam memorable, the supporting cast shines in their roles.  The two thugs on her trail, Frankie and Harriet, provide excellent entertainment while Miriam is off screwing something up somewhere.  Her boss, Ingersoll, is obsessed with tracking down Black, hoping she’ll help him expand his operation beyond its minimal existence.  All three are solid foils for Miriam.  Despite knowing there are two books that follow, they’re not written as simple obstacles for her to overcome.  They have a serious mean streak and will linger long after you close the book.

I loved the hell out of this and I can’t recommend it enough.  On to book two!