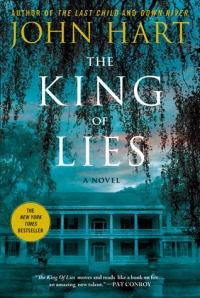 The King of Lies

Ezra Pickens was an old, cold-hearted, womanizing son of a bitch and when his body is discovered with two entry wounds in the side of his skull, there’s no shortage of suspects.  The problem for his son, respected lawyer Jackson “Work” Workman Pickens?  The detective assigned to the case likes him for the murder and a hefty inheritance in his father’s will gives him one hell of a motive.  The problem for the detective?  Work didn’t do it; he was wrapped in the arms of a woman he was seeing behind his wife’s back.  Work suspects his sister but how does he clear his own name without damning his sister?

I had a tremendous experience with Hart’s Edgar Award winning novel The Last Child so I thought I would check out one of his earlier novels – specifically his first one, The King of Lies.  Hart’s great flowing prose returns and while he moves the story with ease, a problem lies with his protagonist.

In an interview discussing his novel Iron House, Hart said that he aims to create characters that are essentially normal people trying to come to grips with abnormal situations.  With Jackson Pickens, he’s certainly normal enough but his reactions to certain situations are anything but consistent and that’s frustrating as a reader.  I couldn’t get a handle on this guy and found it difficult to become absorbed into the story.  I felt like I never really knew the character and while I’m not exactly looking for predictability in a story, I’d like for characters’ reactions to be somewhat logical.  And don’t get me started on Barbara or Vanessa.

I’m also kind of wishy-washy on the ending.  On one hand, I do like how Hart basically recaps the entire novel and deals with any questions that he may have otherwise left unanswered but on the other hand, I don’t like where Hart leaves the characters – I was left with a bad taste in my mouth so to speak.  When it comes to Work, I don’t feel like he deserved the ending he got.

Based on The Last Child, I know Hart is better than this novel and with Iron House on deck, I’m hoping for a more enjoyable experience, although I may wait a while before cracking the cover.