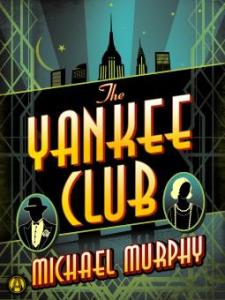 While in town, Jake decides to meet up with Mickey, a fellow gumshoe and his old business partner.  It’s clear something has Mickey on edge but before Jake can pry it out of him, Mickey is gunned down in cold blood.  Can Jake track down Mickey’s killer or is he next in line for the big sleep?

I received a free copy from Netgalley in exchange for an honest review.

Michael Murphy pens a solid mystery that is rich in 1930s culture.  The crackling dialogue, the prohibition era setting and the plot are in the same vein as a Hammett or Chandler whodunit.  I liked the addition of real life social heavyweights in the New York scene like Babe Ruth and Cole Porter and although I felt the main characters were a little thin, the mystery played out well right up until the very end.

The Yankee Club is the first in Murphy’s Jake & Laura series with a second novel slotted for a January 2015 release from Random House imprint, Alibi.

2 thoughts on “The Yankee Club”