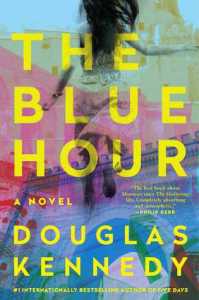 The Blue Hour by Douglas Kennedy

Having a career that requires one to be analytical doesn’t always translate well into personal life.  After a whirlwind romance, Robin falls hard for a client; an artsy world traveler who whisks her away to Morocco for six weeks of sun and relaxation.

Approaching forty and desperate to start a family, Robin grows frustrated as she’s unable to become pregnant.  Following a discovery about Paul’s past that might provide answers to why she’s have difficulty conceiving, she walks out on her husband.  After cooling down, she returns to an empty hotel room in shambles with blood spattered walls.  Now the prime suspect of a murder investigation, can Robin uncover the circumstances involving her husband’s disappearance?

A copy of The Blue Hour was provided by Simon & Schuster in exchange for an honest review.

Overall, I just wasn’t into this story.  I found the main character far too neurotic and self indulgent to really enjoy any of what the author was presenting and for me, that’s generally a deal breaker – especially if you’re writing in a first person narrative.  And while there weren’t many of them, I found the sex scenes unbearable.  I wouldn’t say I’m a prude (there are some steamy images in those Brubaker/Phillips comics I’m always raving about), but I’m not a big fan of sexual play-by-play, I instead subscribe to the theory of “less is more”.

I may not have been the audience for this one.  The first third of the book read like a romance novel, which put me off almost immediately.  I love thrillers and I love mysteries but something about The Blue Hour just didn’t click with me.