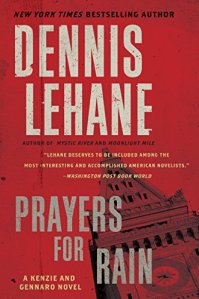 Prayers for Rain by Dennis Lehane

Patrick Kenzie is approached by a woman named Karen Nichols who asks him to scare off a stalker.  After Kenzie, along with the always terrifying Bubba Rowgowski, put the fear of God into the guy, Patrick considers the matter settled.  About four months later, Karen leaves a vague message on Patrick’s phone asking for help with something.  In a rush, Patrick deletes the voicemail and promptly forgets about it.  Not long after, Karen is found dead after an apparent suicide.  Kenzie’s guilt over ignoring Karen’s call begins to get the better of him as he sets out to discover why Karen killed herself – or if there is more to her death than meets the eye.

I initially thought the premise was a little thin and thankfully, so did the majority of the people Patrick talked to at first.  Luckily, Patrick’s instincts are as sharp as a can-cutting Ginsu knife and the case turned out to be a worthwhile pursuit.  So worthwhile that Patrick even managed to bring Angie back into the fold following the soul-crushing events of Gone, Baby, Gone.  I was worried as the chemistry that Bubba, Angie and Patrick share could be the basis for countless novels and I had hoped Lehane wouldn’t screw around with it by taking Angie out of the equation.  However, he knows these characters inside and out and together they form a rare ensemble that any crime fiction writer should aspire to create, so it would be foolish to mess with a good thing.

Patrick’s unwavering determination drives the story as he comes face-to-face with an absolute psychopath of a villain.  The scenes they share together were the very definition of hostility with both men trying to show how little they were shaken by the other’s threats.  I’d be lying if I didn’t have a goofy grin plastered on my face on more than one occasion – it was that kind of nervous/anxious laughter you get where you’re not sure just who was coming out of it alive.

While the Kenzie & Gennaro series is as strong a crime/detective/mystery series as you’re going to get, it isn’t a case where its sum is greater than its individual parts.  Each novel can stand alone as an excellent work of fiction worthy of any reader’s time.  I still have one more to go (Moonlight Mile) before I catch up to where Dennis Lehane left off.  Hopefully he has more planned but with a ten-year gap between books five and six, I wouldn’t hold my breath.