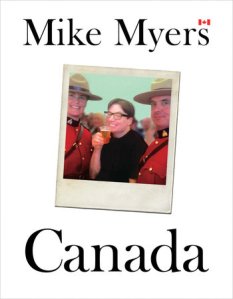 With his new book Canada, comedian/actor Mike Myers sets out to unload as much information about the country he grew up in while also detailing an abridged version of his life story.  The result is an often entertaining yet interesting experiment.

At the outset, Myers is quick to explain that his book is not meant to be a definitive text on the country, but rather his own experiences coming of age in Canada.  So don’t expect him to go into detail surrounding Canada’s role in residential schools and the mistreatment of its indigenous population or any other controversial subject; he’ll let other more qualified writers speak on that.

Instead, he speaks at length about the different accents, odd quirks and cultural milestones that form regional identities throughout the land.  I found myself laughing out loud when he described the East Coast way of ingressive speaking, something my girlfriend pointed out when she moved to Halifax from Ontario a few years back.It also certainly doesn’t hurt that he is a die-hard Toronto Maple Leafs fan!  Myers discusses the importance of hockey as a national pastime woven into the fabric of the country’s popular culture.  It brings people together even if most of the time is spent chirping one another over their respective teams.

My biggest criticism involves the final chapters wherein he discussed the 2015 election and the arrival of Justin Trudeau as the country’s apparent saviour.  I’m not one to really get into politics and while I can get behind Trudeau being a more socially progressive choice for our country, I feel it’s a little too early to heap the amount of praise on him that Myers did.  It seemingly came across as a weird and strange end to a book about the nostalgic views of a transplanted Canadian.

That being said, Canada was an enjoyable read for the most part.  It did its job in making me laugh in all the right spots and I learned quite a bit about Myers’ upbringing and some interesting trivia behind a few of his movies/SNL characters.