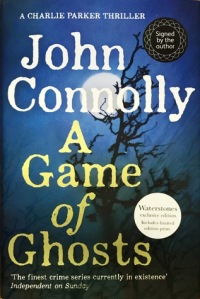 A Game of Ghosts by John Connolly

At the conclusion of the eleventh book in the series, THE WRATH OF ANGELS, Parker came into contact with a list containing the names of many evil men and women. Following the discovery of this list, Parker connected with FBI Agent Ross, a man with whom Parker has since struck a deal. In exchange for selected pages over time, Parker is given impunity to seek out and hunt those named. Along with this negotiated freedom, Parker also receives a generous retainer in exchange for his services to Ross and the FBI, albeit under the table.

Unfortunately, along with the retainer are requests from Ross for additional work. In A GAME OF GHOSTS, Parker is tasked with tracking down Jaycob Ecklund, a private investigator who recently went off the grid working a case for Ross. As Parker, along with Louis & Angel, begin digging into Ecklund’s life, they quickly become caught up in a web of organized crime, murder and the mysterious actions of a deadly cult that will stop at nothing to protect its anonymity.

A GAME OF GHOSTS, the fifteenth book in the series, is the most transformative since the above mentioned THE WRATH OF ANGELS. While dealing with a deadly cult is nothing new for Parker, there are several major moments that will irreparably alter the timeline. Although Connolly has crafted a rich world filled with deeply developed characters, it’s good to know he isn’t just content to coast and is willing to shake things up when needed. I wish I could spill the beans about one of the several shocking events, but I’d ruin it for fans of the series seeing as it hasn’t even been released in North America yet (I nabbed the early UK release).

As far as supernatural activity goes, on a scale of one to ten, if the first novel in the series was a one, then A GAME OF GHOSTS is an eleven. Over the course of the series, Connolly has slowly ratcheted up the scare-factor with each passing entry. Now, at book fifteen, we’re seeing Connolly throw realism completely out the window. While I can remember being hesitant initially with this gradual change in direction, I’ve come to alter my opinion as it helps the series stick out and feel different in a sea of thrillers.

I am forever grateful to Mr. Connolly for providing his readers with a new installment of Charlie Parker’s story every single year. There are not many authors who can do that yet still keep the quality of their work at such a high level. I’d lament about having to wait a whole year for the next book but then I think of George R.R. Martin fans and well.. it could be much worse.