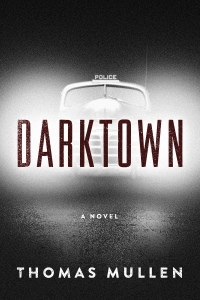 Following a mandate from the Mayor’s office, Lucius Boggs and Tommy Smith are two of the first round of black men hired as policemen to serve the Atlanta Police Department in post-war America.  Despite being officers of the law, Boggs and Smith are painfully limited in what they’re authorized to do.  Sure they can carry guns, but they’re not permitted inside police headquarters, drive police vehicles nor are they allowed to participate in cases involving white men or women.

White officers Dennis “Rake” Rakestraw and his partner Dunlow, offer two sides of the law.  While Rake, a rookie, is more forward-thinking and liberal, Dunlow represents the more “traditional” side of the force – a closely-guarded, deeply-racist “man’s man” of a cop who allows his bigotry to dictate his law enforcement methods.

DARKTOWN picks up following the discovery of a deceased young black woman buried in a trash heap following a gunshot to the chest.  Boggs and Smith had previously seen the woman as a passenger in a vehicle operated by a heavily intoxicated former white police. However, they’re not permitted to arrest white civilians, so they call in two white officers to pull over the driver.   Later, when Boggs and Smith go back to reference their report following Rake and Dunlow’s investigation, all mention of the inebriated individual is scrubbed from record.

Going against department protocol as well as his better judgment, Boggs undergoes his own investigation surrounding the woman’s murder.  Can Boggs and Smith succeed inside a hopelessly corrupt and racist system?  Will Rake break free from his partner’s toxic influence?

A few weeks ago, a school in Mississippi decided to take To Kill a Mockingbird off the shelves and out of the minds of students.  The reason?  The subject matter made children uncomfortable.  Cooler heads prevailed and the book would find itself back into circulation (with parents giving their child permission to read it), but the decision to remove it came from a place of ignorance.  The whole point of that book is to make you feel uncomfortable, to make you question institutionalized racism.   Thomas Mullen’s DARKTOWN isn’t saying anything new when it comes to the treatment of the black population (and neither am I), but I can damn sure tell you that at times, this was nowhere near a comfortable read and like To Kill a Mockingbird, I’m glad it exists.

In order to properly tell this story, Mullen can’t hold back – and he doesn’t.  “Nigger” is used an astonishing amount of times but makes sense considering how liberally the slur was thrown around back then.  While the term unfortunately hasn’t gone the way of the dinosaur, I can say that it’s not something I hear daily (although, to be honest, it’s not like I’m the target of said word) so reading it over and over again was something I couldn’t let wash over me.

Both Rake and Boggs are big damn hero cops that on the surface are seemingly incorruptible. When I was younger, I always preferred villains as they’re usually more complex and interesting but there’s something admirable about the hard-nosed “good guy” fighting against corruption both internally and externally.  I like how Mullen played this against the backdrop of institutionalized racism.  Rake’s drive to get the white police officers out of the black neighborhoods while commendable on the basis of keeping racist cops away from black citizens, still ends up promoting segregation rather than finding a way to push out the crooked lawmen.  Baby steps, I guess.

While the mystery was well-crafted, DARKTOWN is less about the “whodunit” and more about how extraordinarily difficult it was for the black officers to move within the system.  Their installation within the police force came from a place of obligation, not acceptance, so their reluctant colleagues make it tough for them to fully utilize the power that comes with being a police officer.  With this being the first in a series, I’m interested to see the many ways Mullen will test the uneasy relationship between Rake, Boggs and Smith going forward.