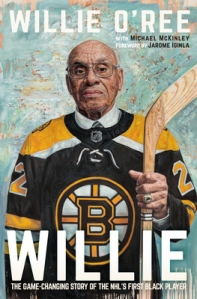 Willie: The Game-Changing Story of the NHL’s First Black Player is the memoir of Willie O’Ree, former Boston Bruin and current ambassador for the NHL’s Hockey is for Everyone program.

To be honest, before reading his book, I didn’t know a whole hell of a lot about Willie O’Ree.  Is that my fault for not looking into who had been the NHL’s first black player?  Or should the blame lie at the feet of the game for not championing someone so courageous?  I’m sure it’s a mixture of both. Either way, I’m happy to have had the opportunity to learn more about Willie and the extraordinary life he has led.

Hockey was Willie’s ultimate passion and he would stop at absolutely nothing to achieve his goal of playing in the NHL.  In fact, he notes that being the “first black player” hadn’t even been on his mind, he said he had never looked at himself as a “black hockey player”, but rather as a “hockey player” first and foremost.  Unfortunately for Willie, that was not how some people chose to see him.  His road to the NHL would not be an easy one, not only would he have to deal with unabashedly racist fans, he was entering into a league with only six teams, which meant only the “best of the best” played in the NHL.

I enjoyed reading about the state of the minor leagues at the time Willie was playing professionally.  While there are basically only two roads into the NHL as a junior player in North America now (the Canadian Hockey League and Collegiate hockey), there seemed to be so many other places to play as a minor league player in the 1950s and 60s.  Willie spent time in the Quebec Hockey League, the Western Hockey League, and the American Hockey League before and after his stint in the NHL.

Willie’s humble nature and unwavering determination make for an enjoyable story.  It’s too bad that he had to put up with the ignorance of others, but he managed his career with grace and unimaginable bravery. I hope this book reaches a wide audience and more people learn about the “Jackie Robinson of hockey.”

Willie: The Game-Changing Story of the NHL’s First Black Player is scheduled for release on October 20th, 2020