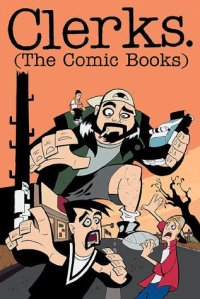 It’s been awhile since I reviewed anything Kevin Smith related.  Since recently moving in with my girlfriend, I now have access to a fairly sizable comic book collection.  Being a Kevin Smith super-fan like myself, I was pleased to see that she owned the trade paperback collection of Smith’s short-lived Clerks comic book series.

There are three stories in this collection.

The Comic Book: Annoyed over how much Steve-Dave and Walt are charging for the latest Star Wars action figures, Randal decides to enter into the collectible business, much to the chagrin of Dante.

The Holiday Special: After noticing an apartment between The Quick Stop and RST Video, Randal discovers that it’s being rented by Santa Claus and his elves leading up to Christmas.  Meanwhile, Dante plans to visit his old girlfriend Caitlin in the hospital.

The Lost Scene:  Smith details the events that occurred in the funeral home during the original Clerks movie. 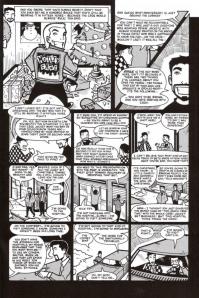 Do you want some art with your dialouge?

I had some initial hesitation before picking this up.  I wasn’t a huge fan of Chasing Dogma but seeing as I love both of the Clerks films as well as the terribly underrated and criminally short-lived cartoon series, I had to give it a shot.

I didn’t much care for the holiday special, although it did have its moments.  The Lost Scene is pretty awesome – it’s a shame it didn’t make it into the original cut of the film but with such a low budget, it made sense not to shoot it.  There’s actually an animated version attached to both the tenth and fifteenth anniversary cuts of the film.  Really funny stuff.  If you haven’t seen it, I recommend it.

The opener is the strongest of the bunch, I think.  It felt like it belonged in the cartoon series but also retained the feel of the movie; a great mix.  Anything that has more Steve-Dave and Fanboy gets a thumbs up from me.  I preferred the artwork from the first two stories over the third.  There wasn’t anything specifically bad in regards to Phil Hester or Andre Parks’ work – just enjoyed the more cartoon-y spin that Jim Mahfood gives the material.