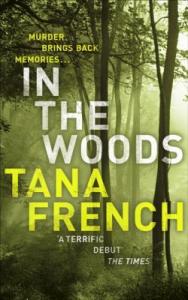 In The Woods by Tana French

When a young girl is found brutally murdered on the site of an archeological dig in Knocknaree county, comparisons are made to an infamous missing persons case that happened over twenty years ago in the same wooded area.  Detectives Rob Ryan and Cassie Maddox are assigned to the investigation but will a secret from Ryan’s past threaten the case?

I’ve been reading crime fiction and police procedurals for a number of years now but I’ve somehow managed to avoid reading Tana French.  When I noticed reviews popping up from friends online, I figured I should see what her work is all about.  Luckily for me, while I was perusing my girlfriend’s bookshelves for a new read, a copy of In The Woods stuck out like a sore thumb.

In The Woods is a long read.  Granted, I did have the mass market paperback release where the pages are smaller thus creating a larger page count, but this one clocked in at a shade under six hundred pages, which is long for a police procedural – at least in my experience.  While there were spots where I felt the action dragged, it’s hard to say what, if anything, could be cut out.  To support its length, French has presented the detectives with many possible angles to investigate, which kept me guessing right up to about the three quarter mark when I figured out where French was heading just slightly ahead of Ryan and Maddox.

When it comes to the characters, French presents a deeply flawed protagonist in that of Detective Ryan.  And when I say deeply flawed, there are parts in this novel where he’s flat out unlikeable.  Luckily, the supporting cast of Cassie, Sam and Chief O’Kelly round out a memorable ensemble that kept me hooked, reading for hours at a time.  Because of this, one could argue that the story is more about the players and less about the mystery.  Because of French’s strong character development, the interrogation scenes stand out as some of the best I’ve ever read in the procedural genre with French turning the intensity knob up to eleven.

With the four novels that follow In The Woods, French has racked up a stack of awards and praise from her peers, so I’m very much looking forward to continuing this series.  Onto The Likeness!

One thought on “In The Woods”