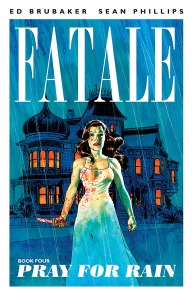 Suffering from amnesia, Jo stumbles into the lives of a struggling grunge band in mid-1990s Seattle.  Initially unaware of her power over the opposite sex, the musicians become inspired and begin writing new, powerful music that could break their status as “one-hit wonders”.  Unfortunately, these flannel-wearing rockers are not the first men who have fallen under Jo’s spell as a figure from her past threatens their newfound success.

When I finished the final page of Pray for Rain, I had to go back and check out my thoughts on trades two and three to make sure I was reading the same series!  This was a huge step in the right direction and could easily be considered the best of the four so far.  I never doubted Brubaker and Phillips but I did feel like something just wasn’t clicking.  However, the dynamic duo is back in fine form and have given me several reasons to stay tuned in.

Phillips is just stellar here creating the gloomy, rainy atmosphere of Seattle which in turn fits well with Brubaker’s hopeless story.  Not taking anything away from the narrative but Phillips’ work is probably the best reason to check this series out.  As far as the story goes, there’s a lot of twists and turns involved that keep things interesting.  The series established a weird Lovecraftian tone early on so when things take a turn to the supernatural, you’re never questioning the direction.

I’m excited for where they go from here.  I may have to make this a monthly read rather than waiting until the trades are out.